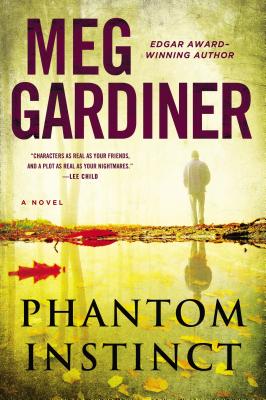 In Edgar Award winning author Meg Gardiner's new stand-alone thriller, an injured cop and an ex-thief hunt down a killer nobody else believes exists.
When shots ring out in a crowded L.A. club, bartender Harper Flynn watches helplessly as her boyfriend, Drew, is gunned down in the cross fire. Then somebody throws a Molotov cocktail, and the club is quickly engulfed in flames. L.A. Sheriff Deputy Aiden Garrison sees a gunman in a hoodie and gas mask taking aim at Harper, but before he can help her a wall collapses, bringing the building down and badly injuring him.
A year later, Harper is trying to rebuild her life. She has quit her job and gone back to college. Meanwhile, the investigation into the shoot-out has been closed. The two gunmen were killed when the building collapsed.
Certain that a third gunman escaped and is targeting the survivors, Harper enlists the help of Aiden Garrison, the only person willing to listen. But the traumatic brain injury he suffered has cut his career short and left him with Fregoli syndrome, a rare type of face blindness that causes the delusion that random people are actually a single person changing disguises.
As Harper and Aiden delve into the case, Harper realizes that her presence during the attack was no coincidence and that her only ally is unstable, mistrustful of her, and seeing the same enemy everywhere he looks.

"An excellent plot, this one will keep readers up all night with non-stop, unforgettable action." - Suspense Magazine

“Meg Gardiner is one of my favorite authors.  She always delivers a terrific read.  Phantom Instinct should go to the top of your 'to be read' pile.”
-Karin Slaughter

"A suspense-building unpredictability that thriller fans will love." - Booklist

MEG GARDINER is the author of eleven critically acclaimed novels, including the Evan Delaney series, of which China Lake won the Edgar Award. Originally from Santa Barbara, California, she divides her time between Austin, Texas, and London.
Loading...
or
Not Currently Available for Direct Purchase