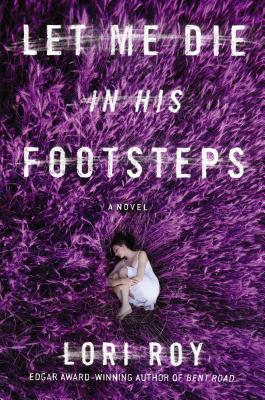 In the spellbinding and suspenseful Let Me Die in His Footsteps, Edgar Award–winner Lori Roy wrests from a Southern town the secrets of two families touched by an evil that has passed between generations.

On a dark Kentucky night in 1952 exactly halfway between her fifteenth and sixteenth birthdays, Annie Holleran crosses into forbidden territory. Everyone knows Hollerans don’t go near Baines, not since Joseph Carl was buried two decades before, but, armed with a silver-handled flashlight, Annie runs through her family’s lavender fields toward the well on the Baines’ place. At the stroke of midnight, she gazes into the water in search of her future. Not finding what she had hoped for, she turns from the well and when the body she sees there in the moonlight is discovered come morning, Annie will have much to explain and a past to account for.

It was 1936, and there were seven Baine boys. That year, Annie’s aunt, Juna Crowley, with her black eyes and her long blond hair, came of age. Before Juna, Joseph Carl had been the best of all the Baine brothers. But then he looked into Juna’s eyes and they made him do things that cost innocent people their lives. Sheriff Irlene Fulkerson saw justice served—or did she?

As the lavender harvest approaches and she comes of age as Aunt Juna did in her own time, Annie’s dread mounts. Juna will come home now, to finish what she started. If Annie is to save herself, her family, and this small Kentucky town, she must prepare for Juna’s return, and the revelation of what really happened all those years ago

Praise For Let Me Die in His Footsteps: A Novel…

"Open Let Me Die in His Footsteps anywhere and Lori Roy’s melodious voice will float off the page….This Depression-era story is a sad one, written in every shade of Gothic black. But its true colors emerge in the rich textures of the narrative, and in the music of that voice, as hypnotic as the scent coming off a field of lavender." --New York Times Book Review

"Let Me Die in His Footsteps is a hybrid of mystery, coming-of-age and Southern gothic literature…it’s taut and evocative – things simmer and tickle and sizzle underfoot, and the book practically smells like a lavender field." --LA Times

"With pithy characters and a winding plot leading readers to dark places they won't anticipate, this is a story of sisters, lovers, mothers and daughters, and what can happen when evil slips its way between those ties." --Associated Press

“An atmospheric, vividly drawn tale that twists her trademark theme of family secrets with the crackling spark of the “know-how” for a suspenseful, ghost-story feel.” --Booklist (starred review)

“A Faulkner-ian tale of sex and violence from the Kentucky hills.” --Kirkus

“The richness of [the] characters makes their decisions crackle. . . . Which, as any Harper Lee fan will tell you, is what makes these stories endure in our very protective hearts. . . . While intense and at times a little ruthless, Roy's novel has elements of both what we love about the southern gothic mixed with the other perennial American classic: the coming-of-age tale. This is a dark story of adolescence in all of its awkward, terrible, exhilarating glory. And that's what makes it sing.”—Bustle

"There are echoes of Flannery O’Connor here: poverty, violence, malevolence, and grace. Roy’s writing is spell-like, using a simplicity of language, deft characterization, an understanding of the dark side of human nature, and relentless plotting in order to pull together every aspect of the conjuring necessary to create a masterpiece of Southern Noir" -- Historical Novel Society

"Reading Lori Roy is a sinuous, near-physical experience, her stories so rich and well-told they twine into the reader in a manner both gentle and profoundly deep. I consider her writing a love-sonnet to American letters. Simply lovely."  --John Hart, Edgar-Award winning and New York Times bestselling author of The King of Lies and Iron House

"This is a beautifully observed story whose details of time, place, and character are stunning little jewels sure to dazzle the eye on every page. . . . Quite simply put, I loved this book." --William Kent Krueger, Edgar-Award winning author of Windingo Island and Ordinary Grace

“Young love, Southern folklore, family feuds, and crimes of passion . . . Roy describes life on a lavender farm in rural Kentucky in vivid detail, and the mystery of what happened years ago will keep readers engaged until the end.” --Library Journal