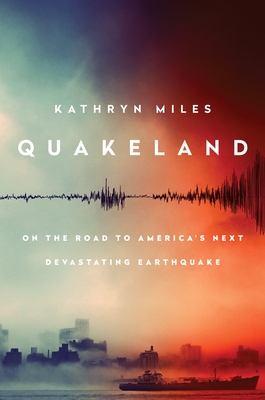 On the Road to America's Next Devastating Earthquake

A journey around the United States in search of the truth about the threat of earthquakes leads to spine-tingling discoveries, unnerving experts, and ultimately the kind of preparations that will actually help guide us through disasters. It’s a road trip full of surprises.

Earthquakes. You need to worry about them only if you’re in San Francisco, right? Wrong. We have been making enormous changes to subterranean America, and Mother Earth, as always, has been making some of her own. . . . The consequences for our real estate, our civil engineering, and our communities will be huge because they will include earthquakes most of us do not expect and cannot imagine—at least not without reading Quakeland. Kathryn Miles descends into mines in the Northwest, dissects Mississippi levee engineering studies, uncovers the horrific risks of an earthquake in the Northeast, and interviews the seismologists, structual engineers, and emergency managers around the country who are addressing this ground shaking threat.

As Miles relates, the era of human-induced earthquakes began in 1962 in Colorado after millions of gallons of chemical-weapon waste was pumped underground in the Rockies. More than 1,500 quakes over the following seven years resulted. The Department of Energy plans to dump spent nuclear rods in the same way. Evidence of fracking’s seismological impact continues to mount. . . . Humans as well as fault lines built our “quakeland”.

What will happen when Memphis, home of FedEx's 1.5-million-packages-a-day hub, goes offline as a result of an earthquake along the unstable Reelfoot Fault? FEMA has estimated that a modest 7.0 magnitude quake (twenty of these happen per year around the world) along the Wasatch Fault under Salt Lake City would put a $33 billion dent in our economy. When the Fukushima  reactor melted down, tens of thousands were displaced. If New York’s Indian Point nuclear power plant blows, ten million people will be displaced. How would that evacuation even begin?

Kathryn Miles’ tour of our land is as fascinating and frightening as it is irresistibly compelling.

Praise For Quakeland: On the Road to America's Next Devastating Earthquake…

“[Miles] peppers her book with quick bits of information about scientists and the work they do in eservice of understanding our planet and its earthquakes. … Her book becomes, in part, a love letter to the tedium and wizardry that is scientific discovery.”
—The New York Times Book Review

“That fear you feel? It's intended... Quakeland seeks to rattle us free of the ignorance, uncertainty and short memory that have paralyzed plans for prevention and survival.”
—Time Magazine

“Miles’s treatment of earthquake mechanics is clear and crisp... Does she succeed in shaking us out of our complacency? I will confess that, although I don’t live in a seismic hot zone, the day I finished reading “Quakeland” I found myself in a grocery store stocking up on bottled water.”
—Wall Street Journal

“an earthquake-themed road trip that is popular science in the Mary Roach mold: the writer as intrepid explorer of science and amiable, wisecracking proxy for the lay reader.”
—Oregonian

“Thanks largely to Miles’s conversational, somehow cheery writing style, I was riveted throughout and heartily recommend this book to people living everywhere. For policymakers, Quakeland should be required reading.”
—Sierra Magazine

“[Quakeland] takes the form of a road trip to visit seismic disasters both past and potential, and seismologists and earthquake engineers who have first-hand knowledge of them. Their colourful personalities, opinions and prejudices tell a story of scientific discovery and engineering remedy... a engaging read.”
—Nature

“Quakeland is everything a popular science book should be: well-researched, anecdotal, sometimes humorous, and easily understood.”
—Shelf Awareness

"Quakeland is a mesmerizing, eye-opening read—not only for those interested in science but for anyone who wants to be better informed about these enigmatic phenomena.”
—Bookpage

“Engrossing, timely, thoroughly researched… Smart, compelling, and fearless in its embrace of science, Quakeland is full of fascinating people imparting big truths. We ignore their knowledge at our peril.”
—Booklist

“Accessible... Readers interested in the history of plate tectonics, seismic risk, and our society’s vulnerability would likely enjoy...”
—Science

“Journalist Kathryn Miles charms and entertains as she crisscrosses the US, talks with experts, draws deft profiles of scientists and engineers and citizens, heads deep into mines or the NYC subway system and ultimately makes clear that earthquakes are the least trackable natural disaster and are NOT just a problem for San Franciscans… And somehow she does it with a light touch, though any homeowners will be sure to check up on their insurance plan right after reading it....
—Huffington Post

“A wide-ranging account of earthquakes, the least understood of natural disasters, with vivid stories of the havoc they create and a warning about what will someday happen in the United States… readable and engaging—not to mention eye-opening, as the author delivers a firm warning to policymakers as well as individual citizens.”
—Kirkus Reviews

"It would be hard to imagine a more vividly readable extended warning than this book by Kathryn Miles, but Quakeland makes one conclusion all but inescapable: nobody’s listening."
—Open Letters Monthly

“Quakeland by Kathryn Miles scared the hell out of me. If you think earthquakes happen only in California, you need to read this book. What an eye opener! Based on the latest unimpeachable and carefully sourced scientific research, this book lays out not only the extreme danger of massive quakes in unexpected places (like the Northeast, Memphis, and Salt Lake City) but also documents the crazy things we are doing that are vastly increasing the frequency and threat of earthquakes. Well-written, gripping, fascinating, harrowing—Quakeland is a book we all need to read, if only to know how to survive when the big one hits.“
--Douglas Preston, author of the #1 New York Times bestseller The Lost City of the Monkey God: A True Story

“This book is as terrifying as it is enthralling. With eye-opening historical context, Kathryn Miles describes the surprisingly wide scope of seismic hazards, the frightening deficiencies of our infrastructure, and the people striving to protect us all. Quakeland is an urgent call to action, one that we would be witless to ignore.”  --Nathalia Holt, New York Times bestselling author of Rise of the Rocket Girls: The Women Who Propelled Us From Missiles to the Moon to Mars

“With seismic prose and John McPhee's gift for translating science with metaphor, Kathryn Miles makes you wonder at the tremendous forces continuously shaping our landscape. You need not live near a fault line (spoiler: you probably do) to enjoy this well-reported, entertaining foray into the scientific subculture of earthquakes. Miles is sparring with Mary Roach for top spot on my science bookshelf.”
--Kim Cross, New York Times best-selling author of What Stands in a Storm

“Full of wit and wisdom, Quakeland takes readers on a journey into what for most of us is an unknown world—the planet beneath our feet. Read this book and you will return from the unknown not only informed and entertained, but even more in awe of the world than you might already have been.”
--Paul Bogard, author of The Ground Beneath Us

“Quakeland was a mesmerizing companion on a trip I took to the Northwest. It's a revelation about the treachery of the crust beneath your feet. This could be the most important book you ever read.”
--Alanna Mitchell, author of Sea Sick

"Superstorm reads like the script of a blockbuster movie, transforming that Halloween storm into a nightmarish monster come to life. She provides horrifying vignettes of the storm's many personal tragedies." —Washington Post

"Wise and harrowing." —The Associated Press

"Explains how a storm so strong it filled the windows of the International Space Station managed to catch the nation flat-footed." —New York Post

"[A] wide-angle, ticktock account of the massive Atlantic storm system that slammed the Eastern Seaboard on Oct. 29, 2012." —Newsday

"Thrilling...Even for those of us who have heard countless hurricane stories, Superstorm, is a valuable addition. It goes beyond the scary radar screens and harrowing photos of the aftermath to the ongoing, massive problems of predicting and surviving such storms." —Tampa Bay Times

"Deftly describes the intricacies of meteorology, government bureaucracy and maritime travel while weaving together several narrative strands into a compelling tapestry." —Roanoke Times

KATHRYN MILES is an acclaimed journalist and writer-in-residence for Green Mountain College, as well as a faculty member for Chatham University’s MFA program. With a BA in Philosophy from St. Louis University and a PhD in English from the University of Delaware, Miles is also a scholar-in-residence for the Maine Humanities Council and a member of the Terrain.org editorial board. Her work has appeared in The Best American Essays, Popular Mechanics, Outside, and The New York Times.
Loading...
or
Not Currently Available for Direct Purchase