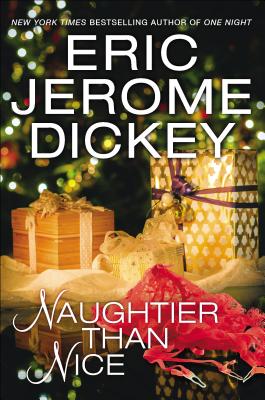 New York Times bestseller Eric Jerome Dickey revisits the scene of his holiday romp Naughty or Nice, featuring the McBroom sisters, whose romantic adventures make for a white (hot) Christmas. Readers first met the McBroom sisters in Eric Jerome Dickey's New York Times bestseller Naughty or Nice. In the highly anticipated sequel, Naughtier than Nice, we find out what happens on the other side of the fairy tale. The lives of Frankie, Tommie, and Olivia (Livvy) haven't turned out quite as planned. Frankie has a pair of stalkers. The life that Tommie had dreamed of having with Blue has become anything but perfect, and Olivia, despite her efforts, hasn't been able to get over the psychological barrier caused by her husband's affair in Naughty or Nice. Frankie's life has taken on an element of danger, and she calls upon Driver, an ex-con who first appears in Dickey's Drive Me Crazy, to bail her out of a potentially life-threatening situation, but that is a secret she has kept from her sisters. Tommie and Blue are now engaged, but due to something her more-mature love has done, the wedding is indefinitely on hold. As Blue and Tommie remain the perfect couple in public, Tommie has found herself physically attracted to a younger man. But that is a secret she has kept from her sisters. Livvy is trying to recapture the adventure she had during her revenge affair. She is seldom intimate with her husband, Tony, but when she has relations with him, it is by her rules and under certain conditions--it has to be a m nage trois. But that is a secret she has kept from her sisters. Though the sisters are as close as any sisters could be, none wants the other two to know the dark secrets she is hiding. And during this season, all of the McBroom sisters are Naughtier than Nice.

Eric Jerome Dickey is the New York Times bestselling author of more than twenty previous novels, as well as a six-issue miniseries of graphic novels featuring Storm (X-Men) and the Black Panther. Originally from Memphis, Dickey now lives on the road and rests in whatever hotel will have him.
Loading...
or
Not Currently Available for Direct Purchase