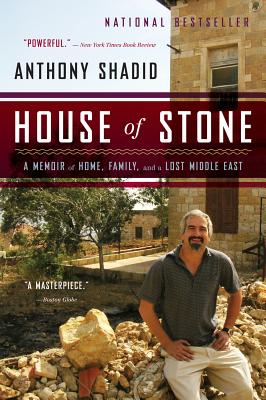 A Memoir of Home, Family, and a Lost Middle East

In the summer of 2006, racing through Lebanon to report on the Israeli invasion, Anthony Shadid found himself in his family’s ancestral hometown of Marjayoun. There, he discovered his great-grandfather’s once magnificent estate in near ruins, devastated by war. One year later, Shadid returned to Marjayoun, not to chronicle the violence, but to rebuild in its wake.

So begins the story of a battle-scarred home and a journalist’s wounded spirit, and of how reconstructing the one came to fortify the other. In this bittersweet and resonant memoir, Shadid creates a mosaic of past and present, tracing the house’s renewal alongside the history of his family’s flight from Lebanon and resettlement in America around the turn of the twentieth century. In the process, he memorializes a lost world and provides profound insights into a shifting Middle East. This paperback edition includes an afterword by the journalist Nada Bakri, Anthony Shadid’s wife, reflecting on his legacy.

“A poignant dedication to family, to home, and to history . . . Breathtaking.” — San Francisco Chronicle

“Entertaining, informative, and deeply moving . . . House of Stone will stand a long time, for those fortunate enough to read it.” — Telegraph (London)

ANTHONY SHADID(1968-2012), author of Night Draws Near, was an unparalleled chronicler of the human stories behind the news. He gained attention and awards, including the Pulitzer Prize, for his front-page reports in the Washington Post from Iraq. As Middle East correspondent for the New York Times, he covered the Arab Spring from Egypt to Libya (where he was held captive in March, 2011) to Syria. In 2010, he earned his second Pulitzer. Tragically, on February 16, 2012, he died while on assignment in Syria.


Praise For House of Stone: A Memoir of Home, Family, and a Lost Middle East…

"This is not just the Arab world’s Year in Provence. It is as if Shadid has combined the breakthrough effects of Amy Tan’s The Joy Luck Club, William Faulkner’s As I Lay Dying, and Frances Fitzgerald’s Fire in the Lake into one enormously likeable book. It is a masterpiece." — John Freeman, Boston Globe "Elegiac, heartbreaking . . . A book conceived as an introspective project of personal recovery — as well as a meditation on politics, identity, craft, and beauty in the Levant — now stands as a memorial. It is a fitting one because of the writing skill and deep feeling [Shadid] unobtrusively displays." — Steve Coll, New York Times "An apt testament — a moving contemplation of how the dead stay with us, and how war scrambles the narrative of family life." — The New Yorker

"Profound, insightful, tragic, and funny . . . There is not space here to sell out all of this book’s many rewards . . . The prose is ripe, the biblical landscapes vividly rendered." — Telegraph (London)

"Shadid’s great skill as a journalist was that of a master storyteller, and he’s never been more effective than in his final book." — Bookforum

"An honest-to-god, hands-down, undeniable and instant classic . . . written with levity and candor and lyricism that makes the book, improbably, both a compulsive read and one you don’t want to end." — Dave Eggers, author of A Hologram for the King