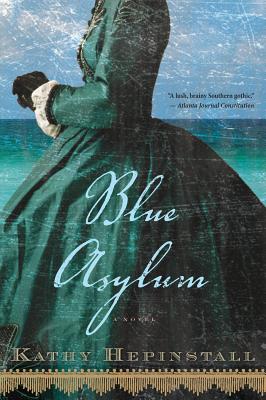 "A first-rate choice for fans of intelligent historical romances."—Library Journal, starred review Amid the mayhem of the Civil War, Iris Dunleavy is put on trial by her husband, convicted of madness, and sent to Sanibel Asylum to be restored to a compliant Virginia plantation wife. But her husband is the true criminal; she is no lunatic, only guilty of disagreeing on notions of cruelty and property.On this remote Florida island, Iris meets a wonderful collection of inmates in various states of sanity, including Ambrose Weller, a Confederate soldier haunted by war, whose dark eyes beckon to her. Can love in such a place be real? Can they escape, and will the war have left any way—any place—for them to make a life together?
"An absorbing story that explores both the rewards and perils of love, pride, and sanity."—Publishers Weekly"With Blue Asylum, Hepinstall presents the reader with the rare and delicious quandary of whether to race through and find out what happens to her characters or to linger over her vivid, beautifully crafted sentences. For me, the only resolution was to read it twice." —Hillary Jordan, author of Mudbound and When She Woke"A gripping story of love and madness in the midst of the Civil War—I couldn’t put it down!"—Kathleen Grissom, author of The Kitchen House

KATHY HEPINSTALL grew up outside of Houston, Texas. Kathy is the best-selling author of The House of Gentle Men, The Absence of Nectar, and Blue Asylum. She is an award-winning creative director and advertising writer.

"What sets Blue Asylum apart is Hepinstall’s luscious prose and the tension within each character that keeps the reader maddeningly off balance...Hepinstall makes inspired use of the Civil War as a means to explore notions of freedom, courage and, especially, opposing principals that both prevent and create change. Battle scenes, glimpsed briefly in Ambrose’s excruciating flashbacks, deliver knockout punches of quiet horror all the more affecting for their subtlety."
—Atlanta Journal-Constitution

"Features excellent pacing and strong character development that animate not only the inmates at the Sanibel Asylum but the characters from the preasylum lives of Iris and Ambrose. A first-rate choice for fans of intelligent historical romances."
—Library Journal, starred review

"Hepinstall exquisitely illustrates the fate of societal outsiders in this richly compelling Civil War–era tale of the former mistress of a Virginia plantation, now confined to a beautiful island asylum, and her burgeoning love for a traumatized Confederate soldier... Deftly interweaving past and present, Hepinstall sets the struggles of her characters against the rigidity of a traditional Southern society and the brutality of war in an absorbing story that explores both the rewards and perils of love, pride, and sanity itself."
—Publishers Weekly

"A deep sense of the natural world, often-lyrical prose, and some touches of southern Gothic help carry along this tale of obsession and redemption."
—Booklist

"With Blue Asylum, Kathy Hepinstall presents the reader with the rare and delicious quandary of whether to race through and find out what happens to her characters or to linger over her vivid, beautifully crafted sentences. For me, the only resolution was to read it twice."
—Hillary Jordan, author of Mudbound and When She Woke

"Blue Asylum is a gripping story of love and madness in the midst of the Civil War—I couldn’t put it down!"
—Kathleen Grissom, author of The Kitchen House

"Blue Asylum casts a spell that keeps the reader turning pages as if in a trance. The language is lyrical but the plot is taut and compelling. The horrors of the Civil War are made real and specific in the story of the wounded soldier and the persecuted wife who find love and hope in the unlikely setting of a supposedly enlightened insane asylum on an isolated island in the Deep South. Kathy Hepinstall is a master storyteller in full command of her craft."
—Elizabeth Forsythe Hailey, author of A Woman of Independent Means

When you first meet Iris, Wendell, and Ambrose in chapter 1, do they seem mad to you? How do they see one another, and how true do you think their first impressions turn out to be? Use examples from the novel to support your opinion.

Throughout Blue Asylum, attempted rescue is a recurring theme: Wendell and the lamb, Iris and the baby, Iris and Ambrose, Dr. Cowell and Iris. Do you think Iris had any influence over whether Ambrose lived or died? What lessons do you think she learned by the end of the story?

Describe Dr. Cowell’s criteria for a “sane” wife. Then, compare Dr. Cowell’s relationship with his wife, Mary, to what the doctor tells his women patients they should be to their husbands. How well does his own marriage hold up to his proposed ideal? How do these expectations, fairly representative of Americans in the late nineteenth century, influence the behavior of the women in this novel? How did it make you feel to learn some of the circumstances under which women were committed to asylums during this time period?

The United States found itself grappling with major shifts in the way people were measured toward the end of the nineteenth century: the abolition movement considered whether African slaves were as equally human as their white masters and what role they should play in society; the women’s suffrage movement challenged men to see their wives, sisters, and daughters as intellectual equals who deserved a voice in government; the Civil War raised questions of states’ rights versus the need for national identity via federal oversight, and pit American against fellow American based on little more than geography. In what ways does Blue Asylum address these issues? Identify the opinions expressed by various characters throughout, and imagine yourself in their shoes. Do you sympathize more strongly with one “side” than another? Why or why not?

When Iris undergoes the water treatment, she tells Dr. Cowell, “This is not treatment. This is torture” (p. 83). He believes she is insane, and yet he can’t let go of her accusations. He tells his wife, “She called it torture! As though I were some kind of monster!” Why do you think he is so disturbed by Iris’s words, even as his wife reminds him that his patients have taken leave of their senses (and by extension, their opinions of his treatment aren’t worth his regard)?

On page 115, Dr. Cowell finds himself feeling that he “somehow returned to his youth, as though if he had turned to a mirror in mid-rant he’d see a man with a smooth, young face and a black beard with no hint of grey.” Contrast this moment with his feeling expressed on page 47 that the island was taking his youth: “Were he not trapped here, with the lunatics and his moody, attention-demanding wife and son, he’d have been able to remain a younger man.” Do you feel any sympathy for Dr. Cowell? Why or why not?

Wendell is obsessed with the memory of his first childhood love, Penelope, a teenage inmate of the island who commits suicide before the opening of Blue Asylum. How does his unrequited love of Penelope affect Wendell’s feelings for Iris? What first draws him to her? If his parents had been more involved in his life, do you think Wendell would have felt the same about the two women? Why or why not?

In what ways does Wendell identify with the inmates at Sanibel? How does he set himself apart from them?

The relationships in this novel are beautifully and authentically rendered—they are complicated and complex and rarely what they first appear to be. Discuss Dr. Cowell’s relationship with his wife and child, and also with the inmates collectively. Do you think the Cowells love each other? Do you think Dr. Cowell loves his work more or less than his family, and why? Use examples from the novel to justify your opinion.

Lydia tells Iris that the latter’s love for Ambrose means “God still sees you not as a lunatic but as His child” (p. 123). Identify the role that religion plays in the novel, including the characters’ expressions of faith and religious feeling.

When Iris first asks Wendell to help her escape from the island, he hesitates. With what is he struggling? Why does he first refuse to help Iris and Ambrose? Do you think he’s right, or is it like Iris says, that he’s just like his father? What ultimately changes his mind?

It’s fairly clear early in the novel that Iris was unfairly committed to the asylum, and the social issue of people (women in particular) being sent off to asylums for simply being “different” shines through the narrative. But what about other inmates, like the man whose feet are too heavy, or the woman who intensely feels for every living creature? Who does and doesn’t belong in the asylum? Where do you think one properly draws the line of madness?

Dr. Cowell changes his mind about Iris several times throughout the novel. What prompts him to consider for the first time that Iris might be telling the truth—that she is the victim of her husband’s lies and base character? What changes his mind again?

When he finally catches up with her, Dr. Cowell kindly tells Iris that she has made Ambrose “as happy as he could have been” (p.262). Do you agree or disagree? Was Iris wrong to take Ambrose with her? What elements factored into Ambrose’s eventual breakdown during the war? Why do you think his discovery of Seth’s true identity sent him over the edge? Do you think he ever could have recovered from his trauma?

The color blue plays a significant role in the novel. Identify the ways in which the author uses the color to evoke certain moods or meanings. What various meanings does the color have for each character?

This novel takes a look at the effects of betrayal on multiple levels. Iris and Lydia betray their husbands’ and society’s expectations of proper, married women. Dr. Cowell betrays his sacred oath to heal and never harm his patients. Wendell betrays his father’s trust. And all of these are set against the backdrop of perhaps America’s first and worst betrayal—the war in which she turned on herself, where brother fought against brother. Identify each instance of betrayal in the novel and discuss each character’s motivations. Do you feel anyone is 100% justified in their actions? Why or why not?

Though the main action of the story takes place in a setting so far removed it may as well be another country, the effects of the Civil War still cast a shadow on almost every aspect of the novel. From the restriction of goods to the posttraumatic stress haunting Ambrose, identify and discuss how the war influences the characters and events of Blue Asylum. Consider how this influence differs or is similar to the effects of war on Americans today.

Discuss the ending of the novel. Why do you think the author chose to end with Dr. Cowell back at the asylum, waiting for the mad old woman to come in for her appointment, and with the image of the woman dancing on the beach with her imagined husband? What is the significance of the birds’ perspective of the scene?