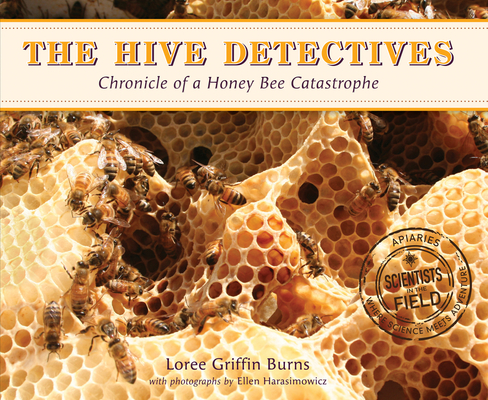 Chronicle of a Honey Bee Catastrophe (Scientists in the Field Series)

Without honey bees the world would be a very different place. There would be no sweet, delicious honey, no beeswax for creams and candles, and—worst of all—barely a fruit, nut, or vegetable to eat. So just imagine beekeeper Dave Hackenburg’s horror when, in 2006, he discovered twenty million of his buzzing charges had vanished without a trace. Those missing bees became the first reported casualties of a mysterious scourge that continues to plague honey bee populations today.

In The Hive Detectives, Loree Griffin Burns profiles bee wranglers and bee scientists across the country who have been working to understand colony collapse disorder, or CCD: the Hackenburgs, who move their three thousand beehives from coast to coast in order to pollinate crops; Mary Duane, who raises bees and bottles blue ribbon honey; and Dennis vanEngelsdorp, Jeffrey Pettis, Diana Cox-Foster, and Maryann Frazier, who study bees from every possible angle in an attempt to discover what is killing them.

In this dramatic and enlightening chronicle of a modern honey bee catastrophe, readers explore the lives of the fuzzy, buzzing insects we ought to love... and join the human quest to protect them.

“A fascinating book from the Scientists in the Field series.” —Booklist, starred review

ELLEN HARASIMOWICZ is a freelance photojournalist who has photographed professionally since 2003. Her work has appeared in the Boston Globe, the Washington Post, and Scientific American.

She photographs primarily for independent schools in Massachusetts, but her real love is travel. Her travels, on assignment and for personal projects, have taken her to more than 30 countries in Europe, Africa, Asia, North America, the Caribbean and Central America. Her love for travel stems from her curiosity, which led her to the world of children’s literature.

Since 2006, Ellen has illustrated four children’s books with her photographs, including three middle-grade books with Loree Burns: The Hive Detectives, Citizen Scientist, and Beetle Buster.

Ellen lives in Massachusetts with her husband, Paul; her work can be seen at ellenharasimowicz.com. Follow Ellen on Twitter @ellharas.


Praise For The Hive Detectives: Chronicle of a Honey Bee Catastrophe (Scientists in the Field Series)…

"Throughout the presentation, readers learn about the anatomy, development, and social behavior of honey bees, and observe the process of scientific investigation and its vital, real-world application. Appended are lists of recommended books, magazines, films, Web sites as well as a glossary and a source bibliography. A fascinating book from the Scientists in the Field series."—Booklist, starred review

"Not long after beekeepers encountered a devastating new problem in their hives in 2006, a team of bee scientists began working to discover the causes of colony collapse disorder (CCD), now attributed to a combination of factors possibly including pesticides, nutrition, mites and viruses...Harasimowicz's clear, beautifully reproduced photographs support and extend the text."—Kirkus, starred review