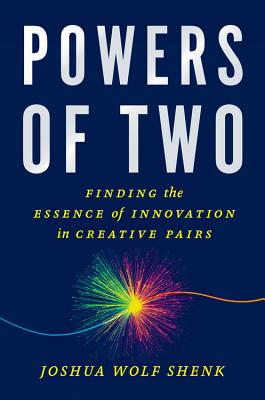 Finding the Essence of Innovation in Creative Pairs

A revelatory synthesis of cultural history and social psychology that shows how one-to-one collaboration drives creative success Weaving the lives of scores of creative duos—from John Lennon and Paul McCartney to Marie and Pierre Curie to Steve Jobs and Steve Wozniak—Joshua Wolf Shenk identifies the core qualities of that dizzying experience we call "chemistry." Revealing the six essential stages through which creative intimacy unfolds, Shenk draws on new scientific research and builds an argument for the social foundations of creativity—and the pair as its primary embodiment. Along the way, he reveals how pairs begin to talk, think, and even look like each other; how the most successful ones thrive on conflict; and why some pairs flame out while others endure. When it comes to shaping the culture, Shenk argues, two is the magic number, not just because of the dyads behind everything from South Park to the American Civil Rights movement to Starry Night, but because of the nature of creative thinking. Even when we're alone, we are in a sense "collaborating" with a voice inside our head. At once intuitive and surprising, Powers of Two will change the way we think about innovation.
http://www.shenk.net/

Praise For Powers of Two: Finding the Essence of Innovation in Creative Pairs…

"Powers of Two is such a brilliant, compelling book, it's hard to imagine that Shenk left any part of himself behind in the writing of it. Or maybe, as he posits, his separateness suffered while his book gained from the merger with his adored editor: the sacrifice of self that's necessary to achieve successful creative coupledom."
—Chicago Tribune

"We sometimes think of creativity as coming from brilliant loners. In fact, it more often happens when bright people pair up and complement each other. Shenk’s fascinating book shows how to spark the power of this phenomenon."
—Walter Isaacson"When I spoke with John Lennon in 1980—the final in-depth interview of his life—he described writing many songs 'eyeball to eyeball' with Paul McCartney. Powers of Two conveys the intimacy and complexity of their collaboration—and collaboration in general—with brilliant clarity."
—David Sheff,
author of All We Are Saying: The Last Major Interview with John Lennon and Yoko Ono

"In this surprising, compelling, deeply felt book, Joshua Wolf Shenk banishes the idea of solitary genius by demonstrating that our richest art and science come from collaboration: we need one another not only for love, but also for thinking and imagining and growing and being."
—Andrew Solomon

"All future accounts of artistry and innovation will be enriched by the treasures Joshua Wolf Shenk has uncovered in the creativity of pairs."
—Lewis Hyde, author of The Gift

"Powers of Two is a dramatic, often delightful demonstration of a truth we usually ignore: great accomplishments are rarely the work of a single person. If you aspire to be creative, the most important step might be finding a trusted partner who can support your strengths and offset your weaknesses."
—Mihaly Csikszentmihalyi, author of Flow

"This is a book about magic; about the Beatles; about the chemistry between people; about neuroscience; and about the buddy system; it examines love and hate, harmony and dissonance, and everything in between. The result is wise, funny, surprising, and completely engrossing."
—Susan Orlean

"Powers of Two is filled with keen insights into the human condition and terrific examples of creativity at work. This is an inspiring book that also happens to be a great read."
—Daniel H. Pink, author of Drive

“Fascinating…[a] provocative thesis on the genesis of creative innovation.”
—Kirkus

JOSHUA WOLF SHENK is a curator, essayist, and the author of Lincoln's Melancholy, a New York Times Notable Book. A contributor to The Atlantic, Harper's, The New Yorker, and other publications, he directs the Arts in Mind series on creativity and serves on the general council of The Moth. He lives in Los Angeles.