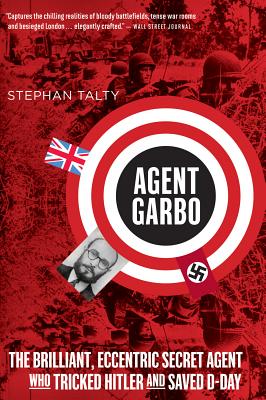 “The book presses ever forward down a path of historical marvels and astonishing facts. The effect is like a master class that’s accessible to anyone, and Agent Garbo often reads as though it were written in a single, perfect draft.”—The Atlantic


Before he remade himself as the master spy known as Garbo, Juan Pujol was nothing more than a Barcelona poultry farmer. But as Garbo, he turned in a masterpiece of deception that changed the course of World War II. Posing as the Nazis’ only reliable spy inside England, he created an imaginary million-man army, invented armadas out of thin air, and brought a vast network of fictional subagents to life. The scheme culminated on June 6, 1944, when Garbo convinced the Germans that the Allied forces approaching Normandy were just a feint—the real invasion would come at Calais. Because of his brilliant trickery, the Allies were able to land with much less opposition and eventually push on to Berlin.

As incredible as it sounds, everything in Agent Garbo is true, based on years of archival research and interviews with Pujol’s family. This pulse-pounding thriller set in the shadow world of espionage and deception reveals the shocking reality of spycraft that occurs just below the surface of history.


“Stephan Talty’s unsurpassed research brings forth one of the war’s greatest agents in a must-read book for those who think they know all the great World War II stories.” —Gregory Freeman, author of The Forgotten 500

"The exciting, improbable adventures of a young Spanish spy who managed to become Britain’s most effective tool in deceiving Hitler. A lively, rollicking good read."
—Kirkus Reviews"Epic intelligence coups of WWII unreel in this colorful caper saga. Talty’s Pujol is a captivating character with a talent for operatic confabulation, but Garbo is just the alluring lead in massive deceptions that the author likens to Hollywood productions, complete with rubber tanks, fake ships, and a Montgomery impersonator. The result is a rollicking story of wartime eccentrics and their labyrinthine mind games."
—Publishers Weekly, starred "Agent Garbo is the fascinating story of a man whose wit, cunning, and steely nerves made the Allied victory possible in World War II. Stephan Talty's unsurpassed research brings forth one of the war's greatest agents in a must-read book for those who think they know all the great World War II stories."
—Gregory Freeman, author of The Forgotten 500