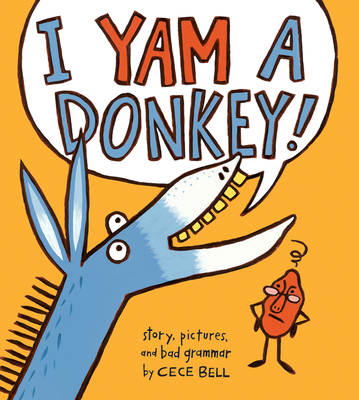 I Yam A Donkey! (A Yam and Donkey Book)

Even frustrated grammarians will giggle at the who’s-on-first routine that begins with a donkey’s excited announcement, “I yam a donkey!” Unfortunately the donkey’s audience happens to be a yam, and one who is particular about sloppy pronunciation and poor grammar. An escalating series of misunderstandings leaves the yam furious and the clueless donkey bewildered by the yam’s growing (and amusing) frustration. The yam finally gets his point across, but regrettably, he’s made the situation a little bit too clear . . . and the story ends with a dark and outrageously funny twist.


Praise For I Yam A Donkey! (A Yam and Donkey Book)…

* "The wordplay is kid-pleasingly silly with a tiny whiff of sophistication...children will never hear “eat your vegetables” the same way again" —Horn Book Magazine, starred review   * "In a linguistic landscape where literally can mean figuratively and flammable and inflammable are interchangeable, Bell’s story celebrates the idea that language changes, and pedants who can’t adapt will be left in the dust (or in a donkey’s belly)." —Publishers Weekly, starred review   "This irreverent, animated outing fairly begs to be read aloud, and children will demand repeat readings." —Booklist   "A hilarious battle of wits between cleverly anthropomorphized cartoon figures...Grab a teaching partner or fellow librarian for a crowd-pleasing dual read." —Bulletin    —

Cece Bell has written and illustrated many books for children, among them the beloved Sock Monkey books, the Geisel Award-winning Rabbit and Robot: The Sleepover, and the Newbery Honor-winning graphic novel El Deafo. She and her husband, author Tom Angleberger, have also collaborated on the picture book Crankee Doodle and the Inspector Flytrap chapter book series. She lives in Virginia with her family.