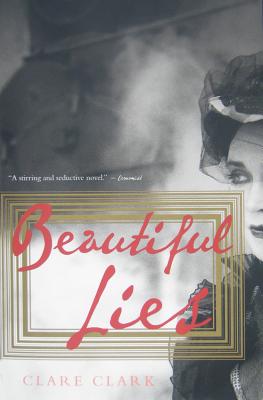 “Beautiful Lies is set in Victorian Britain; at its center is Maribel Campbell Lowe, the wife of a Scottish M.P. and a self-proclaimed Chilean heiress. But Maribel's life is based on a web of lies, and a newspaperman's uncommon interest in her could prove disastrous" —New York Times Book Review

London 1887. For Maribel Campbell Lowe, the beautiful bohemian wife of a maverick politician, it is the year to make something of herself. She is torn between poetry and the new art of photography. But it is soon plain that Maribel’s choices are not so simple. As her husband’s career hangs by a thread, her real past, and the family she abandoned, come back to haunt them both. When the notorious newspaper editor Alfred Webster begins to ask pointed questions, she fears he will not only destroy Edward’s career but both of their reputations.

"A stirring and seductive novel."—Economist
"Clare Clark’s fiction manages to maintain historical accuracy even as it indulges in great storytelling and lush prose...a captivating fable of truth and memory, Beautiful Lies speaks to us quietly yet with strength."—New York Times Book Review
"[An] engaging, compulsively readable window into Victorian society."—Library Journal
"An enthralling novel about an elaborate fiction, Beautiful Lies dazzles with its presentations of late Victorian London’s political and social occupations and a remarkable woman with something to hide... An unpredictable, historically authentic take on how we all carry secrets."—Booklist (starred)
Praise for Clare Clark:
"One of those writers who can see into the past and help us feel its texture."—Hilary Mantel, Booker Prize-winning author of Wolf Hall
"As a storyteller, Clark is endowed with verve and intelligence, but her larger gift, dazzlingly in evidence throughout both her fine novels, lies in the originality of her imagination. She gives us a world that feels alive and intense, magnificently raw."—New York Times Book Review
"Clark’s commitment to historical color is matched by the dramatic arc of an engrossing story."
—Washington Post
"Clare Clark writes with the eyes of a historian and the soul of a novelist."—Amanda Foreman
"An uplifting and ultimately optimistic tale, as well as being impressively narrated. The historical context is sound, and the plot thoroughly engages the reader. It is based on real figures and their circumstances, which are not widely known. This is a wonderful story; I have read Clare Clark’s previous three novels, all of which have been reviewed by the HNS, and this is by far the best." —Historical Novels Society
or
Buy Here
Copyright © 2020 American Booksellers Association