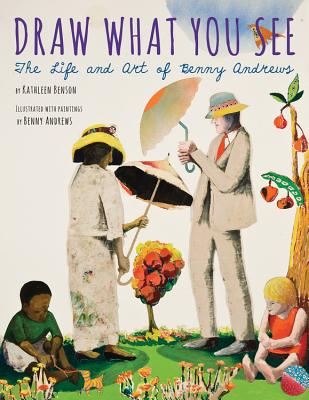 Draw What You See

The Life and Art of Benny Andrews

Benny Andrews loved to draw. He drew his nine brothers and sisters, and his parents. He drew the red earth of the fields where they all worked, the hot sun that beat down, and the rows and rows of crops. As Benny hauled buckets of water, he made pictures in his head. And he dreamed of a better life—something beyond the segregation, the backbreaking labor, and the limited opportunities of his world.      Benny’s dreams took him far from the rural Georgia of his childhood. He became one of the most important African American painters of the twentieth century, and he opened doors for other artists of color. His story will inspire budding young artists to work hard and follow their dreams.

Praise For Draw What You See: The Life and Art of Benny Andrews…

"There's no better illustrator for this narrative than Andrews himself."
—Booklist

* "This singular biography refocuses attention on the struggle for social justice through the extraordinary visions of this singular painter—every illustration is the artist's own."
—Kirkus, starred review

"The narrative is expertly crafted around original Andrews paintings, which are notable for their focus on autobiographical elements and people’s experiences of prejudice as well as for the expressionistic stylization of figures."
—Horn Book Magazine

"Photographs of the artist in his studio open and close the book. His artwork and his story will inspire children to both "draw what they see" and live out their dreams."
—Shelf Awareness

"The illustrations are taken from Andrews’ paintings, and the full-bleed images that fill the lanky pages and sometimes double-page spreads showcase Andrews’ figural strengths, folkloric echoes, and eye for composition...they effectively convey the way Andrews drew on his life and surroundings for his art."
—Bulletin

Kathleen Benson is the author of several picture books, many of which she co-authored with her late husband, Jim Haskins, including John Lewis in the Lead, which won the NCSS Carter G. Woodson Award for the most distinguished social science book for young readers that depicts ethnicity in the United States. She lives in Manhattan.

Benny Andrews was a groundbreaking artist, author, teacher, and activist who is widely considered to be one of the finest African American painters of the twentieth century. His work is included in museum collections around the world. He illustrated many children's books, including Poetry for Young People: Langston Hughes by David Roessel and Arnold Rampersad, for which he was posthumously awarded the Coretta Scott King Illustrator Honor Award; John Lewis in the Lead by Jim Haskins and Kathleen Benson, which won the NCSS Carter G. Woodson Award; and The Hickory Chair by Lisa Rowe Faustino, an ALA Notable book.
Loading...
or
Not Currently Available for Direct Purchase