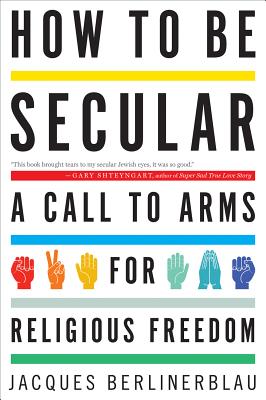 How to Be Secular

A Call to Arms for Religious Freedom

Founding father Thomas Jefferson believed that “religion is a matter which lies solely between Man and his God,” but these days many people seem to have forgotten this ideal. Conservatives claim America is a “Christian nation” and urge that laws be structured around religious convictions. Hardcore atheists, meanwhile, seek to undermine and attack religion at all levels. Surely there must be a middle ground.

In How to Be Secular, Jacques Berlinerblau issues a call to the moderates—those who are tired of the belligerence on the fringes—that we return to America’s long tradition of secularism, which seeks to protect both freedom from and for religion. He looks at the roots of secularism and examines how it should be bolstered and strengthened so that Americans of all stripes can live together peacefully.

“Jacques Berlinerblau mounts a careful, judicious, and compelling argument that America needs more secularists . . . The author’s argument merits a wide hearing and will change the way we think and talk about religious freedom.” —Randall Balmer, author of Thy Kingdom Come: How the Religious Right Distorts Faith and Threatens America

JACQUES BERLINERBLAU, professor at Georgetown University and director of the Program for Jewish Civilization, is the author of four books. He has appeared on radio, television, and print, including NPR, CNN, Al-Jazeera, The Economist, The Jerusalem Post, U.S. News and World Report and the Washington Post. He is the host of the webcast "Faith Complex," which appears on The Huffington Post and elsewhere.
Loading...
or support indie stores by buying on