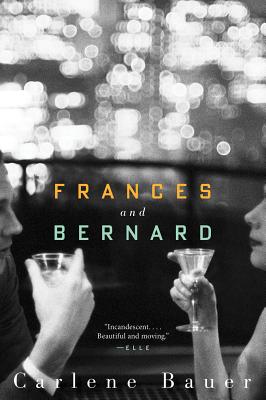 “The main characters in this lovely gem of a novel are loosely based on Flannery O'Connor and Robert Lowell. The story is told entirely in the form of letters -- not an easy feat, but Bauer makes it work beautifully. Frances and Bernard meet in the late 1950s at a writer's colony, and though they don't immediately click, Bernard sends Frances a letter that begins an intense philosophical, spiritual, and physical relationship. A true treat for readers!”
— Cody Morrison, Square Books, Oxford, MS
View the List

Frances and Bernard meet in the summer of 1957. Afterward, he writes her a letter. Soon they are immersed in the kind of fast, deep friendship that can change the course of our lives.They find their way to New York and, for a few whirling years, each other. The city is a wonderland for young people with dreams: cramped West Village kitchens, parties stocked with the sharp-witted and glamorous, taxis that can take you anywhere at all, long talks along the Hudson as the lights of the Empire State Building blink on above.Inspired by the lives of Flannery O’Connor and Robert Lowell, Frances and Bernard imagines, through new characters with charms entirely their own, what else might have happened. In the grandness of the fall, can we love another person so completely that we lose our dreams?In witness to all the wonder of kindred spirits and bittersweet romance, Frances and Bernard is a tribute to the power of friendship and the people who help us discover who we are.

Praise For Frances and Bernard…

CARLENE BAUER is the author of the memoir Not That Kind of Girl, described as "soulful" by Walter Kirn in Elle and "approaching the greatness of Cantwell" in the New York Post. She has written for the likes of n +1, Slate, Salon, and the New York Times.
Loading...
or support indie stores by buying on