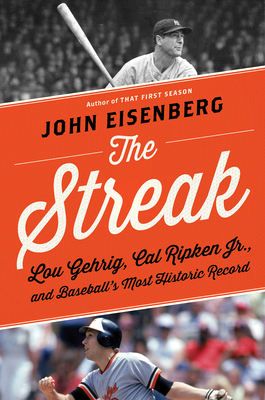 The fascinating story of baseball’s legendary “Ironmen,” two players from different eras who each achieved the coveted and sometimes confounding record of most consecutive games played

When Cal Ripken Jr. began his career with the Baltimore Orioles at age twenty-one, he had no idea he would someday beat the historic record of playing 2,130 games in a row, a record set forty-two years before by the fabled “Iron Horse” of the New York Yankees, Lou Gehrig. Ripken went on to surpass that record by 502 games, and the baseball world was floored. Few feats in sports history have generated more acclaim. But the record spawns an array of questions. When did someone first think it was a good idea to play in so many games without taking a day off? Who owned the record before Gehrig? Whose streak—Gehrig’s or Ripken’s—was the more difficult achievement?
Through probing research, meticulous analysis, and colorful parallel storytelling, The Streak delves into this impressive but controversial milestone, unraveling Gehrig’s at-times unwitting pursuit of that goal (Babe Ruth used to think Gehrig crazy for wanting to play every game), and Ripken’s fierce determination to stay in the lineup and continue to contribute whatever he could even as his skills diminished with age.

The question looms: How do these streaks compare? There were so many factors: the length of seasons, the number of teams in the major leagues, the inclusion of nonwhite players, travel, technology, medical advances, and even media are all part of the equation. This is a book that captures the deeply American appreciation—as seen in the sport itself—for a workaday mentality and that desire to be there for the game every time it called.

JOHN EISENBERG was an award-winning sports columnist for the Baltimore Sun for two decades and is the author of Ten-Gallon War,That First Season,My Guy Barbaro (cowritten with jockey Edgar Prado), and The Great Match Race. He has written for Smithsonian,Sports Illustrated, and Details, among other publications, and currently contributes columns to BaltimoreRavens.com. He lives in Baltimore, Maryland.

"[Eisenberg] builds his story with shrewd analysis and good reporting. The result is a line-drive hit of a book, one that would make Gehrig and Mr. Ripken proud.”
–Wall Street Journal

“The book uses historical study and new reporting to explain how Gehrig and Ripken did it and why it mattered. It tackles the allure of human endurance and the pitfalls of fame, but it is mostly a baseball book for baseball fans. It succeeds as both a thorough accounting and a love note to the game . . . Eisenberg dives into the evolution of the public’s view of consecutive-game streaks, from ignorance in the earliest days through fixation during Ripken’s run. The prose is straightforward, and the details are rich. The depth of his research about Gehrig and his precursors delights . . . “The Streak” is a worthy study of those who played with more reliability than any others.”
–Washington Post

"Eisenberg examines one of baseball's most venerated records while exploring what it all means, providing a compelling, thought-provoking history for fans of America's grand game."
–Kirkus Reviews

"A readable and comprehensive look at one of baseball's most arcane but incredible accomplishments."
–Library Journal

"What makes The Streak such a superb baseball book is the gorgeous weaving of two gripping narratives into one. Cal Ripken, Jr. is fascinating. Lou Gehrig is fascinating. Together, with John Eisenberg's deft touch, the reader is gifted with a saga for the ages."
–Jeff Pearlman, author of Gunslinger and Showtime

"I lived the Cal Ripken story, working for the Baltimore Evening Sun when Cal was drafted and cultivated in the Oriole system. I thought I knew everything about him...until I read this book. John Eisenberg has unearthed the real story of Cal and bookended it with Iron Horse. Spectacular.”
–Dan Shaughnessy, author of Francona (with Terry Francona) and Reversing the Curse