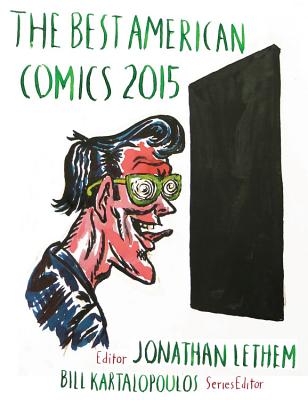 “As I know well from my own field, true vitality consists of stuff that’s further off the radar of general acclaim. The influx of raw arrivals. The deep cuts.” —Jonathan Lethem, from the Introduction

JONATHAN LETHEM is the author of nine novels, including Motherless Brooklyn, The Fortress of Solitude, Gun, with Occasional Music, and most recently Dissident Gardens.

BILL KARTALOPOULOS is a Brooklyn-based comics critic, educator, curator, and editor. He teaches comics history at the School of Visual Arts. More information may be found at on-panel.com.

BILL KARTALOPOULOS is the publisher/editor of Rebus Books and the programming coordinator for SPX: The Small Press Expo. He was a cofounder and the programming director for the Brooklyn Comics and Graphics Festival. He is a member of the Executive Committee for the International Comic Arts Forum (ICAF), a contributing editor for Print magazine, and has worked as an assistant to Art Spiegelman for several years. He lives and works in Brooklyn.

"Not only does Jonathan Lethem choose some of the best stuff in the comics medium, he goes one better and artfully introduces this year’s collection...Lethem has picked some super bits of storytelling."
—USA Today
"The Best American Comics 2015 is a cartoon museum in the reader's hands."
—New York Daily News
"Lethem and Kartalopoulos assemble many of today’s most innovative comic creators in this impressive collection. With remarkable balance, this volume encompasses heartfelt memoir, historical fiction, experiments in nonlinear storytelling, and beyond...this is a strong assemblage of work, showcasing a variety of voices. Anyone interested in the far-ranging possibilities of the comics medium would do well to pick up a copy." —Publishers Weekly
"[B]rimming with surprises and discoveries."
—Bookgasm
"Readers are once again treated to a vital, inimitable tour of the form’s (if not the industry’s) present and future."
—Booklist
or
Not Currently Available for Direct Purchase
Copyright © 2020 American Booksellers Association