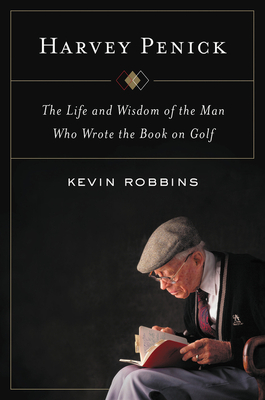 The first-ever biography of the iconic and beloved golf coach who caddied for Francis Ouimet, played with Ben Hogan, competed against Bobby Jones, shaped Ben Crenshaw, and distilled his golf wisdom into the Little Red Book, granting simplicity to a vexing yet beloved sport

Millions of people were charmed by the homespun golf advice dispensed in Harvey Penick’s Little Red Book, a sports classic that went on to become the best-selling sports book of all time. Yet, beyond the Texas golf courses where Penick happily toiled for the better part of eight decades, few people knew the self-made golf pro who coaxed the best out of countless greats — Tom Kite, Ben Crenshaw, Betsy Rawls, Mickey Wright — all champions who considered Penick their coach and lifelong friend.

In Harvey Penick, Kevin Robbins tells the story of this legendary steward of the game. From his first job as a caddie at age eight to his ascendance to head golf pro at the esteemed Austin Country Club to his playing days when he competed with Bobby Jones and Walter Hagen to his mentorship of some of golf’s finest players, Penick studied every nuance of the game. Along the way, he scribbled his observations and anecdotes, tips and tricks, and genuine love of the sport in his little red book, which ultimately became a gift to golfers everywhere.

Part elegy to golf’s greatest teacher, part inquiry into his simple, impactful teachings, part history of golf over the past century, Harvey Penick is an exquisitely written sports biography.

KEVIN ROBBINS is a senior lecturer at the University of Texas at Austin School of Journalism. He spent 22 years as a writer for daily newspapers, including the Austin American-Statesman, (Memphis) Commercial Appeal and St. Louis Post-Dispatch.  His work has appeared in Sports on Earth, the New York Times, espnW, and Texas Monthly, and has twice been listed in The Best American Sports Writing. He lives in Austin, Texas.

Praise For Harvey Penick: The Life and Wisdom of the Man Who Wrote the Book on Golf…

"To read Robbins’ bio on the life of Penick is to read about how golf can shape a life and how that life can extend into others in a unique and special way."
—
GolfDigest.com

"A readable, conscientious biography that fills in the blanks, doing justice to Penick’s lucid teachings, and the legacy he left behind."
—The Austin American-Statesman

“Deeply researched and lovingly written…The most important book of the last decade in the sports genre. If you are a golf fan, you owe it to yourself to read it.”
—The San Jose Examiner

"A detailed biography...This book will appeal to those interested in the development of golf in the 20th century."
—Library Journal

“Harvey Penick was a rare gentleman whose legacy deserves this book. Kevin Robbins has revealed through extensive and caring research the aspects of Penick's life that made him the endearing man he was. Harvey Penick: The Life and Wisdom of the Man Who Wrote the Book on Golf opens wide a window into the soul of someone whose story transcends the game.”
—Ben Crenshaw, two-time Masters Tournament champion

“This thorough, absorbing biography is also a history of golf in America and how one man taught so many how to hit a golf ball so well….Kevin Robbins provides great anecdotes and stories about and from [Harvey Penick’s] most accomplished students, including Betsy Rawls, Mickey Wright, and Tom Kite.”
—Kirkus Reviews

"Finally the book that explains how Harvey Penick's humble, humane life led to an incomparable treasure trove of golf wisdom and insight. Kevin Robbins's work is an important contribution to golf history." —Bill Pennington, author of Billy Martin and On Par

“I’m always thrilled to learn about the quiet giants and caretakers of golf, no less so with Kevin Robbins’s beautiful account of the game’s most influential teacher and mentor. Harvey Penick’s life was a graceful journey through the game, a story of one man’s humble trials and epiphanies and gently tutored wisdom that, down the fairway, resulted in the bestselling sports book of all time — a gift to every golfer and student of the game. This book deserves an honored spot right by Harvey’s beloved Little Red Book.”
—James Dodson, author of American Triumvirate and Final Rounds

"A warm, insightful portrait of an uncommonly wise and gentle soul. Harvey defined 'teacher' and you will learn why."
—Mark Frost, best-selling author of The Greatest Game Ever Played, The Grand Slam, and The Match

"Harvey Penick led an exceptional golfing life, and Kevin Robbins has written an exceptional account of it. His book is transporting. I have a whole new understanding of Penick, his writings, and how Ben Crenshaw, Tom Kite, Betsy Rawls and all the others under his tutelage became the people they became. What a life, captured here beautifully."
—Michael Bamberger, author of Men in Green and To the Linksland

“What a great story about a great man. Anyone who knew Harvey knew he was special. This book just confirms it.”
—Kathy Whitworth, LPGA Hall of Fame golfer

“Legendary golf coach Harvey Penick touched so many lives, Hall of Fame players and weekend duffers alike. Thanks to Kevin Robbins’ fascinating biography, Penick’s advice, encouragement and good counsel once again allows us to play through.”
—Tim Wendel, author of Summer of ’68 and Castro’s Curveball