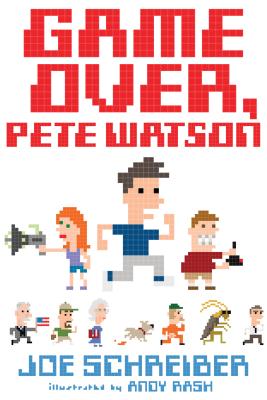 When videogame obsessed Pete Watson discovers his dad is not only a super-spy but has been kidnapped and is now trapped inside a video game, he has to use his super gaming skills and enter the game to rescue him.  Will he be able to save his friends and family and the entire world from giant mechanical cockroaches and a massive cyber attack set to take down the world's network?  And if he succeeds, who will save Pete from his massive crush on Callie Midwood?
From the comedic mind of Joe Schreiber (Lenny Cyrus School Virus, Au Revoir Crazy European Chick, Perry's Killer Playlist), comes an action-packed Alex Rider-meets-Greg Heffley middle grade romp that grabs readers by the funny bone and doesn't let go! Illustrated throughout with black and white comic drawings by Andy Rash.


Praise For Game Over, Pete Watson…

"Schreiber remains talented at combining anything-can-happen action and on-the-mark humor...Rash's spot cartoons are entirely in sync with the story's goofy metafictional humor and deliver many jokes themselves, making the novel read like a distant action-oriented cousin to the Wimpy Kid books."
—Publisher's Weekly

"A madcap adventure that leaves no doubt that 'video games are serious business.'"
—Booklist

Andy Rash was born on a mountain top in Tennessee, educated in the swamps of Georgia and the canyons of New York, and lives with his wife and son in Milwaukee. He has illustrated for The New York Times, The Wall Street Journal, Time, Entertainment Weekly and The New Yorker. His children's books have received received numerous accolades, including an Amazon Editor's Choice Award and the Brown County Book Award (Indiana). Visit rashworks.com.
Loading...
or
Not Currently Available for Direct Purchase