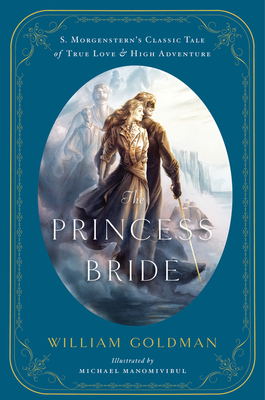 As Florin and Guilder teeter on the verge of war, the reluctant Princess Buttercup is devastated by the loss of her true love, kidnapped by a mercenary and his henchman, rescued by a pirate, forced to marry Prince Humperdinck, and rescued once again by the very crew who absconded with her in the first place. In the course of this dazzling adventure, she'll meet Vizzini—the criminal philosopher who'll do anything for a bag of gold; Fezzik—the gentle giant; Inigo—the Spaniard whose steel thirsts for revenge; and Count Rugen—the evil mastermind behind it all. Foiling all their plans and jumping into their stories is Westley, Princess Buttercup’s one true love and a very good friend of a very dangerous pirate.

Born in Boston, Massachusetts, and raised in Bangkok, Thailand, MICHAEL MANOMIVIBUL currently resides in Oakland, California. He is a graduate of the California College of the Arts, and his work has been featured in Spectrum: The Best in Contemporary Fantastic Art and the Folio edition of Moonfleet, among many other publications.