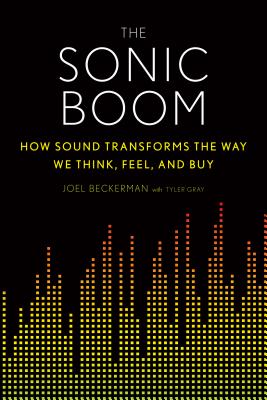 A surprising look at the hidden power of sound, revealing how people and brands can use it to inspire and persuade — or annoy

From horror movie scores to national anthems to the crunchy sound of potato chips, sound and music greatly impact how we feel about our lives and the messages and products we encounter every day. With the right tools and understanding, anyone can cut through the meaningless noise competing for our attention and learn to use sound as a rich storytelling strategy.

You don’t need to be a musician or a composer to harness the power of sound. Joel Beckerman explains how companies, brands, and individuals can strategically use sound to get to the core of their mission, influence how they’re perceived by their audiences, and gain a competitive advantage. The key to these sonic strategies involves creating “boom moments” — transcendent instants when sound connects with a listener’s emotional core.

The Sonic Boom draws surprising insights from real world examples: the way Disney parks score every second of their guests’ experience; how Chili’s restaurants uses lessons from evolutionary psychology to sell tons of sizzling fajitas, how the sound of a special edition Mustang’s engine is designed to make drivers feel like action-movie heroes. Sure to appeal to fans of Made to Stick and This Is Your Brain on Music, The Sonic Boom offers readers a powerful new vocabulary for sharing impactful messages with sound.


Praise For The Sonic Boom: How Sound Transforms the Way We Think, Feel, and Buy…

"The Sonic Boom will alter how you hear the world." --TIME

"Equal parts sociological study and business advice, using unique everyday examples– for instance, how the fate of the Chili’s fajita empire rested on the sound of the sizzling platter, and how Disneyland approaches soundscapes for a fully immersive experience–  to explain how sound effects our mood and shopping habits." --EW.com

"Beckerman's anecdotes, including how Apple computers came to have their particular start-up noise, are engaging." --Los Angeles Times

"Thanks to such entertaining asides and Beckerman’s enthusiastic conviction that sound matters more than anything, readers of The Sonic Boom might suddenly find they’re hearing things they had never noticed before." --Washington Independent Review of Books

"A fast and provocative read that will appeal to a wide, general audience, especially those interested in the psychology of marketing." --Library Journal
"Informative...The book’s strength lies in the specificity of its examples: the restaurant chain Chili’s triggered Americans’ hunger by amping up the sizzle of fajitas; Disney creates “fake quiet”—a soundscape of birds and forest sounds—to help people feel they are somewhere magical...This book is directly aimed at corporations, fund-raisers, and party planners, but shoppers, donors, and partygoers should also read it to learn about how their decisions are being affected by the soundscapes in which they are immersed." -- Publishers Weekly

"The author makes a strong case that we are unaware of the degree to which 'the hidden world of sound' influences our moods and the choices we make. Although we are more aware of the information we obtain through sight, Beckerman bolsters his conclusion that it is sound rather than sight that is our most important sense, citing how The Star Spangled Banner and Beethoven's Fifth Symphony evoke powerful emotions by the use of a few repeated notes. We instantly recognize these musical phrases, or 'sound logos,' which 'efficiently let listeners recall and understand rich stories.'...Interesting insight on the use of sound bites to merchandise products." --Kirkus

“I've spent my life curating, creating, and collecting sounds. But Beckerman and Gray have shown here that there are still plenty of sounds that we've all missed. The Sonic Boom reveals the music and structured cacophony of everyday life.”
—Moby

"The only force more powerful than taste or smell when trying to create an emotional response? Music. The right sound at the right time can slam you right back to childhood, create dread, inspire empathy, turn you on a dime to an emotional jellyfish. The right song at the right time can change—and has changed—the world, leading directly to social change and even revolutions. Music defines us. Joel Beckerman knows. Let him tell you all about it."
—Anthony Bourdain, chef, bestselling author of Medium Raw, No Reservations, and Kitchen Confidential

“Pick this book up. Put it close to your ear. Riff through the pages. Hear that? Those are ideas—Beckerman’s ideas—flying by a mile a minute. Reading Sonic Boom is like seeing colors for the first time!”
—Fred Graver, writer/producer, TV creative lead at Twitter

“Beckerman and Gray show how the right sound at the right moment forges bonds between brands and people—and how bad sound breaks them. The Sonic Boom illuminates the surprising opportunities that are revealed when we utilize sound thoughtfully and strategically, not just tactically.”
—Andrea Sullivan, chief marketing officer, North America, Interbrand

“Beckerman offers an intriguing examination of the manipulative and inspirational power of sound in our everyday lives. It made me listen to my ears!”
—George S. Clinton, film composer and Chair of Film Scoring at the Berklee College of Music

“We are all susceptible to the power and manipulation of sound and Beckerman has beautifully described this mysterious process. As a producer, this book not only makes my choices and use of sound more informed but hopefully more effective.”
—Gordon Elliott, executive producer of ABC’s “The Chew”