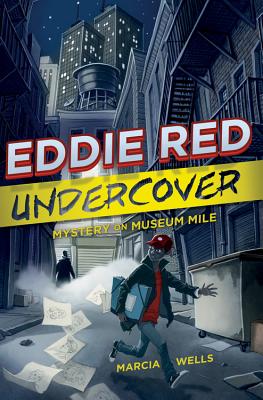 Art, mystery, fun and friendship, combine in this illustrated middle grade series debut. Sixth grader Edmund Xavier Lonnrot, codename "Eddie Red," has a photographic memory and talent for drawing anything he sees. When the NYPD is stumped by a mastermind art thief, Eddie becomes their secret weapon to solve the case, drawing Eddie deeper into New York's famous Museum Mile and closer to a dangerous criminal group known as The Picasso Gang.

With page-turning adventure and fun characters, this first installment in the Eddie Red series is a must-read for any fan of puzzles and mystery.A Spring 2014 Indies Introduce New Voices selection

"A sure pleaser for Cam Jansen grads or anyone fond of knotty, lightweight capers solved with brainpower (and a little luck)."—Kirkus "Eddie Red is bound to be a series that will appeal to fans of fast-paced mysteries"
—School Library Journal

"This is a strong start to a promising new series, and as Eddie would say, it's uber-cool."
—Booklist

Marcia Wells is the author of the Edgar-nominated mystery series Eddie Red Undercover. She holds a Master's degree in Spanish literature and lives with her family in Vermont.