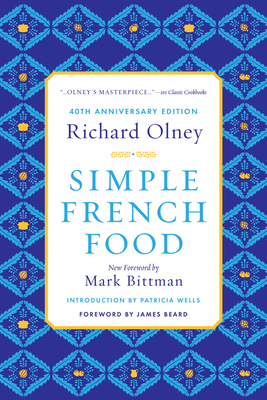 Richard Olney was considered a culinary genius for his ability to elevate cooking to a practical art. He wrote evocatively about the beauty and pleasure in cooking by focusing on preparing simple foods well. This new edition of his classic cookbook includes a fresh cover, new interior design, and a foreword by Mark Bittman—so that a whole new generation of food lovers can enjoy this inspiring book. Olney’s 175 recipes are so straightforward that cooks will be inspired to go right into the kitchen: herb omelets, fish with zucchini, lamb shanks with garlic, and many more. He also shares techniques (several featuring his own illustrations), such as fermenting vinegar, in line with the back-to-basics trend in cooking. Olney’s emphasis on simplicity and improvisation in cooking will resonate with today’s cooks and food lovers.

The late Richard Olney was and is an American culinary icon. He was a member of the eminent Académie International du Vin of Provence for many years. He was chief consultant to the Time-Life Good Cook series and was the author of The French Menu Cookbook, Yquem, a history of the wine of Chateau d'Yquem, and Ten Vineyards Lunches.