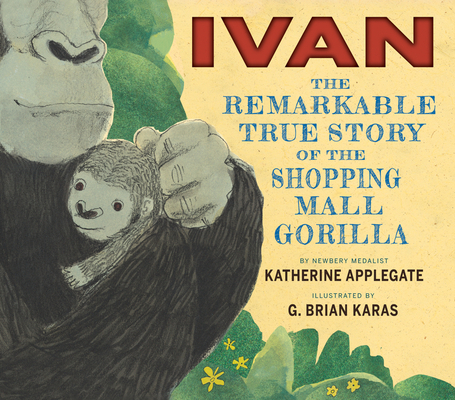 The Remarkable True Story of the Shopping Mall Gorilla

In a spare, powerful text and evocative illustrations, the Newbery medalist Katherine Applegate and the artist G. Brian Karas present the extraordinary real story of a special gorilla.
Captured as a baby, Ivan was brought to a Tacoma, Washington, mall to attract shoppers. Gradually, public pressure built until a better way of life for Ivan was found at Zoo Atlanta. From the Congo to America, and from a local business attraction to a national symbol of animal welfare, Ivan the Shopping Mall Gorilla traveled an astonishing distance in miles and in impact.
This is his true story and includes photographs of Ivan in the back matter.

Praise For Ivan: The Remarkable True Story of the Shopping Mall Gorilla…

"Gently paced, with moving but reassuring images, this is an age-appropriate introduction to the issues of captivity and animal welfare."
—Kirkus

"Karas's darkly hued, smudgy illustrations complement the tone of the narrative and convey the sense of loneliness and isolation that marked the gorilla's existence."
—School Library Journal

"The spareness of both text and pictures invites readers to find their own meaning in the moving story."
—Horn Book Magazine

"Karas's muted illustrations capably reflect the contrasts between Ivan's happy early life in Africa, his gloomy years in captivity, and his eventual transfer to a new home."
—Publishers Weekly

"The text is streamlined but powerful, and younger kids who aren’t up for the linguistic and emotional challenges of Applegate’s fictional account of Ivan will find this a thoughtful and intriguing introduction; older readers who have read The One and Only Ivan may enjoy it as well."
—Bulletin

Katherine Applegate’s many children's books include the Newbery Award-winning novel The One and Only Ivan, the bestselling novels Wishtree and Crenshaw, the bestselling Animorphs series, and the picture books Ivan and The Buffalo Storm. She lives in California. Visit her online at katherineapplegate.com and on Twitter at @kaauthor.

G. Brian Karas is the award-winning author and illustrator of many acclaimed picture books. He lives in upstate New York. Visit him online at www.gbriankaras.com and on Twitter @gBrianKaras.