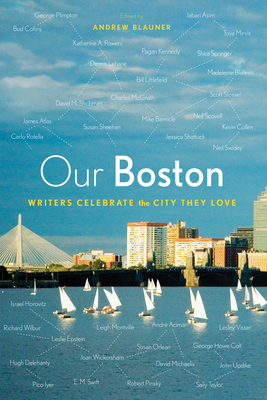 Writers Celebrate the City They Love

What defines Boston? Its history? Its landmarks? Its sports teams and shrines?

Perhaps the question should be: Who defines Boston? From Henry David Thoreau to Dennis Lehane, Boston has been beloved by many of America’s greatest writers, and there is no better group of men and women to capture the heart and soul of the Hub. In Our Boston, editor Andrew Blauner has collected both original and reprinted essays from Boston area writers past and present, all celebrating the city they love. In the wake of the Boston Marathon bombing, they responded to his call to celebrate this great city by providing almost all brand-new works.

From Mike Barnicle to Pico Iyer, Susan Orlean to George Plimpton, Leigh Montville to Lesley Visser, Pagan Kennedy to James Atlas, here is a collection of the best essays by our best writers on one of America’s greatest cities.

Praise For Our Boston: Writers Celebrate the City They Love…

"Like the remarkable city to which they pay tribute, the pieces assembled in this book are diverse, engrossing, illuminating, emotional, funny — and glorious. Anyone who loves or has ever loved Boston will want a copy." — Claire Messud, author of The Emperor’s Children and The Woman Upstairs

"Our Boston gives us skilled, knowing, warm, observant writers who embrace the city personally, pointedly, suggestively, and in so doing, tell us so very much about our country, ourselves. Their Boston is a telling reminder of a nation's story." — Robert Coles, Pulitzer Prize–winning author of Children of Crisis and The Call of Service

"This book is for anyone who remembers the Combat Zone and Filene's Basement and the old, un-air-conditioned Garden, who knows where they were in the summer of '67 and the winter of '78 and the fall of '04, who waited in line for Steve's Smoosh-ins in Somerville and still goes to the original Dunkin' Donuts in Quincy. It's also for anyone who loves great writing and learning about the lives of great writers. It's an absolute gem of a book — as perfect as a Legal lobster dinner or a Toscanini's sundae." — Seth Mnookin, author of The Panic Virus and the New York Times bestseller Feeding the Monster: How Money, Smarts, and Nerve Took a Team to the Top

"A distinguished, eloquent, and deeply felt testimony evoking not only the shadow on our hearts, but also the resolve and vitality of this great American city." — Alec Wilkinson, author of The Ice Balloon

"Our Boston is a stellar anthology, a love letter to a resilient city penned by an all-star team of writers, from Lehane to Updike to Orlean, among others. This book is as full of history and surprises as the city itself." — Tom Perrotta, author of The Leftovers

"A collection of nonfiction pieces by an impressive array of writers...A mustread for everyone who already cares about Boston and anyone looking beyond the tourist guides for a more intimate view of this iconic American city."--Booklist

"The quality of the writing is uniformly high...worthy and moving."--Kirkus Reviews

Andrew Blauner is the founder of Blauner Books Literary Agency. He is the editor of Coach: 25 Writers Reflect on People Who Made a Difference; Brothers: 26 Stories of Love and Rivalry; and Central Park: An Anthology. He is also co-editor of Anatomy of Baseball. A graduate of Brown University and Columbia Business School, he is a member of PEN and the National Book Critic Circle.
Loading...
or support indie stores by buying on