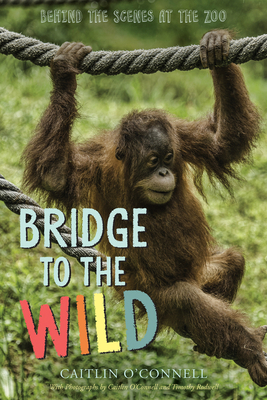 Bridge to the Wild

Behind the Scenes at the Zoo

Hear crisp sounds of the hornbill in the cool air.
Listen to the morning symphony that greets you as you enter the front gate.
Then, step onto a leafy path that leads to a secret world of animals, each of whom you won’t want to forget, here at Zoo Atlanta.
Over five days we meet a menagerie of magnificent animals—pandas, elephants, gorillas, meerkats, flamingos and more—alongside the longtime animal lover, scientist, and researcher Caitlin O’Connell. With inside access to the guidance and knowledge of their beloved zoo caretakers and with stunning photographs, we are able to see the day-to-day marvels—and sometimes misfortunes—behind the animals’ enclosures that often go unseen by the everyday zoo visitor.
In this example of narrative nonfiction at its best, O’Connell has created a bridge to wild, a rare chance to look beyond the zoo and to inspire guests to see for themselves just how special the animals we share our world with are.

Praise For Bridge to the Wild: Behind the Scenes at the Zoo…

"Readers should find the book’s facts and photos intriguing, and the collaborators’ curiosity and passion inspiring."
— Publishers Weekly

"O'Connell presents the modern zoo in a clear light, acknowledging the challenges of replicating favorable conditions for the social, physical, and reproductive health of the exhibited animals... An important, engaging introduction to a modern zoo, its dedicated staff, and the fascinating animals in its care."
— Kirkus

"O’Connell’s love of animals is undeniable, and young readers will identify with the personal details and warm observations she includes."
— Booklist

Dr. Caitlin O'Connell is a Consulting Assistant Professor in the Department of Otolaryngology, Head & Neck Surgery at Stanford University School of Medicine and a world renowned expert on elephants and vibrotactile sensitivity. She is the author of the internationally acclaimed nonfiction science memoir, The Elephant's Secret Sense (2007, Free Press). Her narrative nonfiction photo book An Elephant's Life (2011, Lyons Press) uses a graphic novel approach to revealing subtle and intimate aspects of elephant society. Her co-authored nonfiction children's book, The Elephant Scientist (2011, Houghton Mifflin Children's Books) won five awards, including the Robert F. Sibert Honor and Horn Book Honor for 2012. A Baby Elephant In The Wild (2014, Houghton Mifflin Harcourt Books for Young Readers) is a Junior Library Guild Select, and Elephant Don: The Politics Of A Pachyderm Posse (University of Chicago Press) came out in 2015. Her debut novel was Ivory Ghosts (Random House).  O'Connell is the co-founder and CEO of the nonprofit organization, Utopia Scientific (www.utopiascientific.org), dedicated to research and science education. She is also co-director of Triple Helix Productions, with a mandate to develop more accurate science content for the media. She has written five screenplays with science themes and has just finished her first co-authored novel to inspire girls with an interest in physics. She has taught Science Writing for Stanford University and The New York Times Knowledge Network. Visit her author website at www.caitlineoconnell.com.

Also visit her elephant blog: elephantskinny.tumblr.com. And be sure to watch an award-winning documentary about her research on the Smithsonian Channel: www.smithsonianchannel.com/sc/web/show/3373743/elephant-king.

The photographers Caitlin O’Connell, Ph.D., and Timothy Rodwell, M.D., Ph.D., M.P.H., are scientists and professional photographers that have blended art and science to help make science more accessible and engaging. Their photography has appeared in National Geographic, National Wildlife Magazine, Discover, Science News, Africa Geographic, and many other international magazines, scientific journals, and newspapers. Caitlin is on the faculty in the Stanford School of Medicine and Timothy is an assistant professor at the University of California, San Diego School of Medicine.