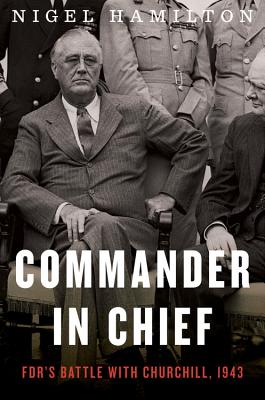 In the next installment of the "splendid memoir Roosevelt didn't get to write" (New York Times),  Nigel Hamilton tells the astonishing story of FDR's year-long, defining battle with Churchill, as the war raged in Africa and Italy.

Nigel Hamilton's Mantle of Command, long-listed for the National Book Award, drew on years of archival research and interviews to portray FDR in a tight close up, as he determined Allied strategy in the crucial initial phases of World War II. Commander in Chief reveals the astonishing sequel — suppressed by Winston Churchill in his memoirs — of Roosevelt's battles with Churchill to maintain that strategy.  Roosevelt knew that the Allies should take Sicily but avoid a wider battle in southern Europe, building experience but saving strength to invade France in early 1944. Churchill seemed to agree at Casablanca — only to undermine his own generals and the Allied command, testing Roosevelt’s patience to the limit. Churchill was afraid of the invasion planned for Normandy, and pushed instead for disastrous fighting in Italy, thereby almost losing the war for the Allies. In a dramatic showdown, FDR finally set the ultimate course for victory by making the ultimate threat. Commander in Chief shows FDR in top form at a crucial time in the modern history of the West.

NIGEL HAMILTON is a best-selling and award-winning biographer of President John F. Kennedy, General Bernard “Monty” Montgomery, and President Bill Clinton, among other subjects. His most recent book, The Mantle of Command: FDR at War, 1941–1942, was long-listed for the National Book Award. He is a senior fellow at the McCormack Graduate School, University of Massachusetts, Boston, and splits his time between Boston, Massachusetts, and New Orleans, Louisiana.

"Ably dramatizes Roosevelt's wranglings with Churchill during World War II ... Provocative ... It is stimulating to follow Hamilton as he lays out his argument."—Thomas E. Ricks, New York Times Book Review

"A detailed look at Franklin Roosevelt's role in the Allied strategy midway through World War II, with an emphasis on his relations with Winston Churchill. Hamilton (The Mantle of Command: FDR at War, 1941-1942, 2015, etc.) shows Roosevelt's clear vision of how to win the war and how to create a postwar society that would prevent such wars from recurring. Defeating and disarming Germany and Japan was just the first step; creating an international structure to prevent them from rearming was the only way to ensure a peaceful future. To achieve this, Roosevelt had to convince his own allies—even his own generals—that his approach would achieve the desired outcome. Stalin understandably wanted a second front to force Hitler to commit troops elsewhere. Churchill thought the way to attack Germany was through Italy or the Balkans, the "soft underbelly." The U.S. Chiefs of Staff wanted to launch an invasion through France before their troops were battle-hardened or to put America's main effort into defeating Japan. Hamilton is particularly hard (perhaps too hard) on Churchill, who had the advantage of writing a postwar history that justified his actions. Except for the U.S. interception of Japanese Adm. Yamamoto's plane, there is almost nothing on the action in the Pacific theater. But Hamilton nicely documents his account with contemporary sources ranging from Roosevelt's cousin (and confidante) Daisy Suckley and Canadian Prime Minister Mackenzie King to Joseph Goebbels, as well as official documents from the major players. The author offers plenty of colorful period detail, including the kinds of cocktails Roosevelt served Churchill and his family and the furnishings of the lavish private home Roosevelt occupied in Casablanca while attending the Allied summit during the North African campaign. As a result, the book presents a convincing portrait of its main subject, strengthening readers' confidence in the author's conclusions. The book is strongly pro-Roosevelt, but Hamilton gives a solid inside view of the strategic thinking that went into the campaign against Hitler as America laid the groundwork for the D-Day invasion the following year."—Kirkus Reviews (starred)