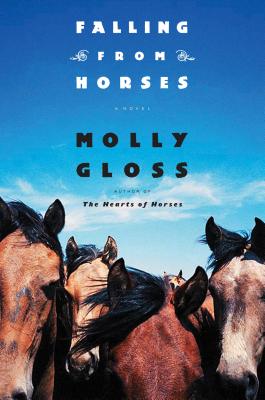 “Falling from Horses is the story of a young man, a young woman, and a young Hollywood set against the memories of growing up in eastern Oregon, among the horses, cattle, and hard work it takes to live there. Bud, the son of ranchers, buys a bus ticket to Hollywood to be a rider in cowboy movies. On the way he meets Lily Shaw, a sassy screenwriter, and their lives become intertwined with the telling of what led him to leave home. Brutal and beautiful, Falling from Horses is filled with stunning descriptions of the world of early movie making and the landscapes that shape us.”
— Rene Kirkpatrick, Eagle Harbor Book Company, Bainbridge Island, WA
View the List

In a new novel from the best-selling author of The Hearts of Horses and The Jump-Off Creek, a young ranch hand escapes a family tragedy and travels to Hollywood to become a stunt rider.  In 1938, nineteen-year-old ranch hand Bud Frazer sets out for Hollywood. His little sister has been gone a couple of years now, his parents are finding ranch work and comfort for their loss where they can, but for Bud, Echol Creek, where he grew up and first learned to ride, is a place he can no longer call home. So he sets his sights on becoming a stunt rider in the movies — and rubbing shoulders with the great screen cowboys of his youth.

On the long bus ride south, Bud meets a young woman who also harbors dreams of making it in the movies, though not as a starlet but as a writer, a real writer. Lily Shaw is bold and outspoken, confident in ways out of proportion with her small frame and bookish looks. But the two strike up an unlikely kinship that will carry them through their tumultuous days in Hollywood — and, as it happens, for the rest of their lives.

Acutely observed, Falling from Horses charts what was to be a glittering year in the movie business through the wide eyes and lofty dreams of two people trying to make their mark on the world, or at least make their way in it. Molly Gloss weaves a remarkable tale of humans and horses, hope and heartbreak, narrated by one of the most winning narrators ever to walk off the page.


Praise For Falling from Horses: A Novel…

"Hollywood glamour has no place in the rough-and-tumble cowboy movies being churned out by studios in the late 1930s. That’s discovered by Bud Frazer, a young man from a ranching family looking to make his way as a stunt rider and, in the process, distance himself from personal tragedy. On the bus ride there, he strikes up what would become a lifelong friendship with an aspiring screenwriter. What follows are challenges for both Bud and his new friend Lily as they try to make their dreams reality. Gloss strips away any romantic notions of ranching life or moviemaking with detailed descriptions of long days of work and the tricks used on horses in the cowboy flicks. Bud is a marvelous narrator—direct, self-effacing, and descriptive, looking back with some bemusement at the brashness of his 19-year-old self. The emotions stirred by his tale are as honest as a hard day’s work during a roundup. The novel is sturdy in its simplicity, a send-up of the cowboy myth that replaces it with something more valuable—a cowboy with heart."
—Booklist

"I read Falling from Horses in two gulps. The writing is gorgeous, the setting so beautifully realized, both time and place, the narrative voice unforgettable, and all the characters so real and compelling.  Tremendous, page-turning....I could not have loved it more."
—Karen Joy Fowler, author of We Are All Completely Beside Ourselves and The Jane Austen Book Club

“The story of a boy growing up into a man by way of ambition, adventure, catastrophe, love, and grief. A beautiful, moving novel, cut from the American heartwood.”
—Ursala K. Le Guin, author of Lavinia and The Unreal and the Real: Selected Stories

"Falling From Horses is a clear-eyed, breathtaking look at a small corner of life unknown to most: cowboy stunt riders in 1930's Hollywood.  Gloss adeptly brings to life characters in search of the American Dream, while illuminating the "myth of the cowboy West" and the harsh realities that come along with it.  A moving story filled with heart and insight by an author whose love of the American landscape rings loudly through each page."
—Gail Tsukiyama, author of A Hundred Flowers and The Samurai’s Garden

“A beautifully crafted story of the friendship that develops between two young people…Molly Gloss makes the little-seen life of a movie stuntman and a back-lot script girl come alive in this entertaining and often touching tale.”
—Phillip Margolin, author of Worthy Brown’s Daughter

“Molly Gloss is always exploring the dangerous place where reality and imagination combine to form the American West, and never more than in this book, plunging as it does into the heart of the dream machine. She has a tremendous gift for bringing a situation alive, so be ready: you’re about to live these lives. It’s a great experience.”
—Kim Stanley Robinson, author of Shaman and 2312

MOLLY GLOSS is the best-selling author The Hearts of Horses, The Jump-Off Creek, winner of both the Pacific Northwest Booksellers Award and the Oregon Book Award,  The Dazzle of Day, winner of  the PEN Center West Fiction Prize, and Wild Life, winner of the James Tiptree Jr. Award.

Bud sets out for Hollywood intending to find work as a movie cowboy. What does he imagine this work will look like? What are his preconceived notions about the Hollywood movie industry?

Much of the novel takes place at the cusp of World War Two. Do you see events in the larger world having much impact on the characters’ lives? How will the war affect each of them?

Lily came to Hollywood determined to become a screenwriter. What qualities did she possess that might have helped her succeed? What roadblocks stood in her way?

Did you think the relationship between Bud and Lily would blossom into romance? What traits in each of them could have led them, instead, toward lifelong friendship?

Parts of the novel are set on a ranch in the 1920s and early 1930s, a time of worldwide economic depression, drought, and technological advances. How were these things changing the way of life for ranchers in the West? Can you think of aspects of ranch life that remain the same today as in the 1880s when Elbert Echol and his wife first settled on their ranch?

Late in the novel, Bud speaks of ways in which “the cowboy stories went wrong,” and he tells us “the humanity has been hollowed out of our movie heroes and villains.” What do you think he means by this? Do you agree with his statements?

Bud has seen violence and death both in his life on the Echol Creek ranch, and in his work as a stunt rider for the movie industry. Explore the differences between these experiences.