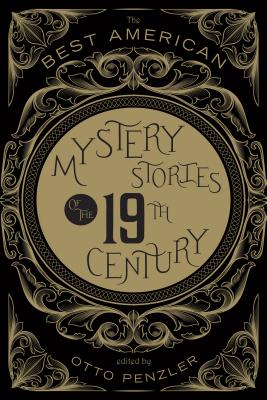 An unparalleled treasury of crime, mystery, and murder from the genre’s founding century

With stories by Washington Irving, Nathaniel Hawthorne, Mark Twain, Louisa May Alcott, L. Frank Baum, Edith Wharton, Stephen Crane, and Jack London, The Best American Mystery Stories of the Nineteenth Century is an essential anthology of American letters. It’s a unique blend of beloved writers who contributed to the genre and forgotten names that pioneered the form, such as Anna Katharine Green, the godmother of mystery fiction, and the African-American writer Charles W. Chesnutt. Of course, Penzler includes “The Murders in the Rue Morgue,” recognized as the first detective story, and with thirty-three stories spanning the years 1824–1899, nowhere else can readers find such a surprising, comprehensive take on the evolution of the American mystery story.

OTTO PENZLER is a renowned mystery editor, publisher, columnist, and owner of New York’s The Mysterious Bookshop, the oldest and largest bookstore solely dedicated to mystery fiction. He has edited more than fifty crime-fiction anthologies. He lives in New York.

"The 32 selections in Penzler’s rich compendium of early American mystery stories feature a wide range of criminal activities. Organized chronologically, the volume opens with Washington Irving’s “Story of the Young Robber,” a gripping tale of jealousy, passion, and murder told by an obsessive teenager who joins a band of kidnappers that targets his ex-lover. In Nathaniel Hawthorne’s “Mr. Higgenbotham’s Catastrophe,” Dominicus Pike, a gossipy tobacco seller, meets a stranger in the woods and hears of the death of a noted businessman under “ambiguous circumstances.” Abraham Lincoln’s “Remarkable Case of Arrest for Murder,” a true crime account first published in 1846, tells of three sinister brothers whom he defended in an unsolved “strange affair” in Illinois. Poe is represented with his groundbreaking “The Murders in the Rue Morgue” and “The Purloined Letter,” which introduced C. Auguste Dupin, the “first eccentric genius detective.” Readers will also savor works by such luminaries as Daniel Webster, Louisa May Alcott, Mark Twain, Edith Wharton, and Jack London, as well as by a number of forgotten, if no less deserving, names. Penzler (Kwik Krimes and more than 50 other anthologies) draws on his vast knowledge of the genre for his cogent introduction and commentary on individual entries."--Publishers Weekly, STARRED

"From Penzler, editor of “The Best American Mystery Stories” series, comes a new anthology of 19th-century American mystery fiction. Classics by Edgar Allan Poe and Anna Katharine Green are presented alongside lesser-known works by well-known authors, including Washington Irving, Nathaniel Hawthorne, Louisa May Alcott, Mark Twain, Edith Wharton, L. Frank Baum, and Jack London, as well as several forgotten contributors to the genre. There’s a gem of a story by African ­American author Charles W. Chesnutt and a legal clunker by Abraham Lincoln that will make you grateful he didn’t quit his day job. Penzler heralds each story with a brief introduction to the author and a description of the work’s significance to the genre. VERDICT Penzler’s latest collection is the literary equivalent of a B-movie marathon. A guaranteed satisfying read for die-hard classical mystery enthusiasts and lovers of literary Americana, if not for everyone else."--Library Journal