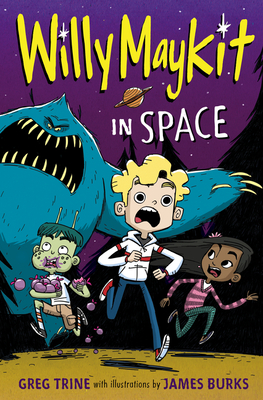 Earth-dwelling fourth-grader Willy Maykit couldn’t be more excited about his school field trip to Planet Ed. Willy’s class will blast off for the afternoon, learn about outer space, and be home in time for dinner. But when he wanders off on his own, Willy ends up being left behind on Ed! Can Willy, along with his classmate Cindy and an alien boy named Norp, outsmart the big hungry monsters on Ed until someone rescues them? With a little help from an android who likes knock-knock jokes and a seagull with terrific aim, they just might!

Praise For Willy Maykit in Space…

"The cartoon-style illustrations are amusing and plentiful and will attract reluctant and enthusiastic readers alike."
—School Library Journal

"Readers new to chapter books and who like to laugh often will most likely find Willy's story peppered with just enough silly humor to keep the pages turning. "
—Kirkus

"Effortlessly diverse in open, friendly ways...the two stories of bold adventurers headed back toward home are exhilarating. Readers seeking a speedy space thrilled and fans of Trine's other series will be well pleased with this outing."
—Bulletin

Greg Trine is the author of the Adventures of Jo Schmo series and the Melvin Beederman, Superhero series. He lives with his family in Ventura, California. gregtrine.com.

James Burks is an illustrator of picture books and graphic novels as well as an animator of movies and television shows. He lives in Valencia, California. www.jamesburks.com.
Loading...
or support indie stores by buying on