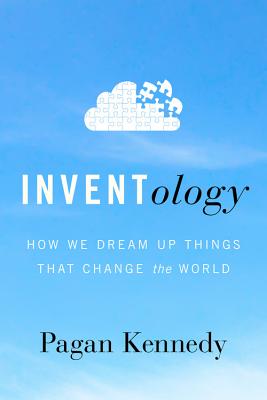 How We Dream Up Things That Change the World

Find out where great ideas come from.

A father cleans up after his toddler and imagines a cup that won't spill. An engineer watches people using walkie-talkies and has an idea. A doctor figures out how to deliver patients to the operating room before they die.

By studying inventions like these — the sippy cup, the cell phone, and an ingenious hospital bed — we can learn how people imagine their way around "impossible" problems to discover groundbreaking answers. Pagan Kennedy reports on how these enduring methods can be adapted to the twenty-first century, as millions of us deploy tools like crowdfunding, big data, and 3-D printing to find hidden opportunities.

Inventology uses the stories of inventors and surprising research to reveal the steps that produce innovation. As Kennedy argues, recent advances in technology and communication have placed us at the cusp of a golden age; it's now more possible than ever before to transform ideas into actuality. Inventology is a must-read for designers, artists, makers—and anyone else who is curious about creativity. By identifying the steps of the invention process, Kennedy reveals the imaginative tools required to solve our most challenging problems.

Praise For Inventology: How We Dream Up Things That Change the World…

"[Inventology] offers a new perspective into the process of invention that will inform and illuminate."
—Publishers Weekly

"'Inventology'" may be a real science; researchers are beginning to study it, and teachers are teaching it. Some 21st-century creations (crowdfunding, 3D printing) are breaking down barriers (money, time) between new ideas and a useful product, so a golden age of innovation seems in the offing. A delightful account of how inventors do what they do."
—Kirkus, Starred

PAGAN KENNEDY was the New York Times Magazine’s “Who Made That?” columnist, and is the author of the New York Times Notable Book Black Livingstone, the Barnes & Noble Discover pick Spinsters, and other books. Her work has appeared in the Boston Globe, Dwell, The Nation, and elsewhere.
Loading...
or
Not Currently Available for Direct Purchase