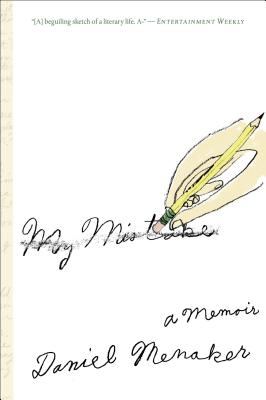 “Being a longtime reader of the New Yorker, I found Menaker's behind-the-scenes account of his career there absolutely riveting. The literary life is gutted and splayed for all to see. Menaker's professional story is interspersed with his personal life, and both fed his writing career. His years at Random House and HarperCollins are also included, with fascinating details about contemporary authors and how a book is created. This is a must-read for booksellers and serious readers.”
— Ellen Jarrett, Porter Square Books, Cambridge, MA
View the List

“At the epicenter of literary New York, Menaker is an irreverent guide to the publishing world’s inner workings . . . His own journey, compelled by his self-knowledge and sense of humor, elevates this memoir into more than witty chatter.” — Chicago Tribune

“Impossible to resist.” — Jennifer Egan, author of A Visit from the Goon Squad

In these pages Daniel Menaker brings us a “ruefully funny insider’s tour of the publishing world” (Vogue.com). Haunted by a self-doubt sharpened by his role in his brother’s unexpected death, he offers wry, hilarious observations on publishing, child-rearing, parent-losing, and the writing life. But as time passes, we witness a moving, thoughtful meditation on years well lived, well read, and well spent. Full of mistakes, perhaps. But full of effort, full of accomplishment, full of life.

“At once jaunty and erudite . . . The writing simply shines.” — San Francisco Chronicle

Praise For My Mistake…

"[A] beguiling sketch of a literary life... [and] a wryly personal history of magazine and book publishing over the past four decades. A-"
—Entertainment Weekly

“In this insightful memoir, Menaker leads his readers down the hallowed halls of The New Yorker... But the book isn’t all business. Menaker also delves into the ups and downs of his personal life, from summers at his uncle’s camp, to the death of his mother. Tender, smart and witty, this book is truly unputdownable.”
—Real Simple

"At the epicenter of literary New York, Menaker is an irreverent guide to the publishing world's inner workings. . . [and] tells great stories about editors William Shawn (quirky), Tina Brown (in hot pursuit of what's hot), William Maxwell, Roger Angell and others. . . His own journey, compelled by his self-knowledge and sense of humor, elevates this memoir into more than witty chatter."
—Chicago Tribune, Editor's Choice

"A ruefully funny insider’s tour of the publishing world.”
—Vogue.com

"[A] sparkling gem of a memoir... The writing simply shines; it's at once jaunty and erudite. I kept wondering, "How does he do that?"
—Katie Hafner, San Francisco Chronicle

"Menaker gives readers a glimpse into the less-than-rarefied world of fiction — publishing, marketing, buying and selling. And it's fascinating. . . But Menaker also can be funny and lighthearted."
—Washington Post

"[Menaker] is an expert at turning those proverbial life-lemons into lemonades; his description of his protracted recent struggle with lung cancer, for example, winds up being one of the memoir's most inspiring and invigorating sections."
—Paris Review

"Menaker's memoir captures a pair of lost worlds: the old lefty Greenwich Village, where he grew up in the 1940s and 1950s, and the byzantine kingdom of The New Yorker, where he worked for 26 years, mostly during the peculiar editorship of William Shawn."
—Johns Hopkins Magazine

"[Menaker] contemplates the origins, happenstance, and consequences of his devotion to literature in a warm, humorous, on-point memoir. Amiably self-deprecating, Menaker is a deft sketch artist, vividly portraying loved ones (especially his older brother, who goaded him to excel and whose early death is the source of depthless sorrow) and colleagues (his portraits of New Yorker staff are hilarious, barbed, and tender). His insider view of publishing is eye-opening and entertaining."
—Booklist

"[Menaker] writes here of his hectic childhood with well-preserved romanticism. The result is charming. [He] is at his best when irreverent: chuckling at aptronyms (people aptly named), or deflating New Yorker legends (William Shawn and Tina Brown, most notably). Still, in this book of years, gossip is secondary to the writer’s own musings and memories. Menaker leaves the reader with a sense of the vast triumph that is a life well lived."
—Publishers Weekly

"A well-known editor’s funny and thoughtful memoir of wrong turns, both in and out of publishing. . . Menaker doesn’t just recount experiences; he digs away at them with wit and astute reflection, looking for the pattern of a life that defies easy profit-and-loss lessons."
—Kirkus, starred review

"Menaker examines a life lived well if not perfectly. He’s bold enough to explore his years at The New Yorker, where he stayed for 26 years despite discouragement from William Shawn, and the perpetual self-doubt that has dogged him, particularly owing to his role in his brother’s inadvertent death. Certainly of interest to memoir fans and literati."
—Library Journal

"How can something written so accurately be so witty? Don't you have to cheat a bit to wring the humor out of life? Daniel Menaker has constructed a compelling tale that irises down to a powerful and emotional climax and is delivered in exacting prose woven into affecting poetry."
—Steve Martin

"My Mistake is only sometimes rueful. It is also frequently funny and splendidly precise as it takes a look back at a life led in the world of magazine editing and book publishing, a behind-the-scenes rumination of a time gone by. Intriguing now, it will be necessary later; readers will be thankful for this quirky and delightful piece of history."
—Elizabeth Strout, Pulitzer Prize winner and bestselling author of Olive Kitteridge and The Burgess Boys

"Daniel Menaker's distinctive journey through his own memories is impossible to resist—and not just for those of us with an appetite for literary anecdote. My Mistake is also the story of literary New York, with keen, vivid impressions from Menaker's Forties childhood, Cold War coming-of-age, and long career at the epicenter of the publishing industry during the onslaught of the Digital Age."
—Jennifer Egan, author of A Visit from the Goon Squad

"I can't remember when I've read a memoir this—let's say 'soulful.' Funny, sad, and wryly self-aware, Menaker shines a bright light on his own background, our literary life, and his own path through it."
—James Gleick, author of The Information

"My Mistake brings to mind the poetic prose of James Agee. Menaker's stories of life as fiction editor at The New Yorker and Random House are a delight, the way he tells them simply perfect. Humorous, thoughtful, heartbreaking and brave. I have not enjoyed a memoir more."
—Julie Klam, New York Times bestselling author of Please Excuse My Daughter

DANIEL MENAKER (1941- 2020) began his career as a fact checker at The New Yorker, where he became an editor and worked for twenty-six years. A former book editor, Menaker authored of six books and wrote for the New York Times, the Atlantic, Parents, Redbook, and many others.