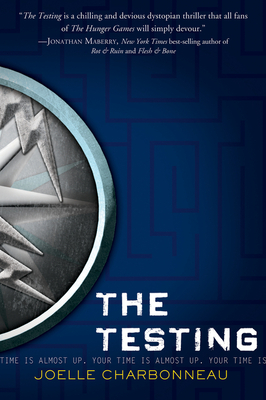 In Cia's dystopian society it's an honor to be chosen for The Testing.  But it’s not enough to pass the Test. Cia will have to survive it.

It’s graduation day for sixteen-year-old Malencia Vale, and the entire Five Lakes Colony (the former Great Lakes) is celebrating. All Cia can think about—hope for—is whether she’ll be chosen for The Testing, a United Commonwealth program that selects the best and brightest new graduates to become possible leaders of the slowly revitalizing post-war civilization. When Cia is chosen, her father finally tells her about his own nightmarish half-memories of The Testing. Armed with his dire warnings (”Cia, trust no one”), she bravely heads off to Tosu City, far away from friends and family, perhaps forever. Danger, romance—and sheer terror—await.


Praise For The Testing…

“The Testing is a chilling and devious dystopian thriller that all fans of The Hunger Games will simply devour. Joelle Charbonneau writes with guts and nerve but also great compassion and heart. Highly recommended.”—Jonathan Maberry, New York Times best-selling author of Rot & Ruin and Flesh & Bone

"I galloped through this excellent read; I was in suspense the whole time."—Charlaine Harris, author of the Sookie Stackhouse series

"There is nothing standardized about this Testing. Charbonneau's imagination will surprise readers at every turn."—Jennifer M. Brown, children's editor, Shelf Awareness

"Action-packed and full of twists, The Testing will keep you guessing until the very last page—and desperate for the next book!"—Erica O'Rourke, author of the Torn Trilogy

"Charbonneau jumps into the packed dystopia field with a mashup of Veronica Roth's Divergent and Suzanne Collins' Hunger Games trilogy, but she successfully makes her story her own."—Kirkus

"Charbonneau is a fantastic story teller and this book is a tribute to that background. The intrigue in The Testing passes evaluation of what a good dystopian novel should represent."—VOYA, 4Q 5P M J S

"The plot twists are well integrated and will keep readers on edge awaiting the next volume."—Horn Book

"The influence of The Hunger Games is obvious, and The Testing will satisfy readers who want similar dystopian adventures." —SLJ