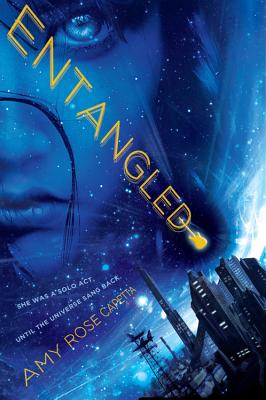 Alone was the note Cade knew best. It was the root of all her chords.

Seventeen-year-old Cade is a fierce survivor, solo in the universe with her cherry-red guitar. Or so she thought. Her world shakes apart when a hologram named Mr. Niven tells her she was created in a lab in the year 3112, then entangled at a subatomic level with a boy named Xan.
Cade’s quest to locate Xan joins her with an array of outlaws—her first friends—on a galaxy-spanning adventure. And once Cade discovers the wild joy of real connection, there’s no turning back.

"Rock and roll crashes head-on into sci-fi in this outing from debut author Capetta. . . Raucous, fun, and futuristic, this should appeal to fans of Antony John's Five Flavors of Dumb and R. J. Anderson's Ultraviolet."
—Booklist

"This is an accomplished debut, an intriguing and thought-provoking space adventure that will hopefully lead to a sequel."
—VOYA, 4Q 4P S

"A rollicking space adventure perfect for fans of the cult classic TV show Firefly."
—The Bulletin of the Center for Children's Books —

Amy Rose Capetta holds an MFA in Writing for Children & Young Adults from Vermont College of Fine Arts. She has a particle-level love of mind-bending science and all sorts of music. She adores her small patch of universe, but also looks intently at the stars. Entangled is her first book with Houghton Mifflin.
Loading...
or
Not Currently Available for Direct Purchase