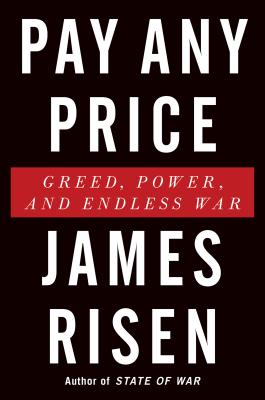 Ever since 9/11 America has fought an endless war on terror, seeking enemies everywhere and never promising peace. In Pay Any Price, James Risen reveals an extraordinary litany of the hidden costs of that war: from squandered and stolen dollars, to outrageous abuses of power, to wars on normalcy, decency, and truth. In the name of fighting terrorism, our government has done things every bit as shameful as its historic wartime abuses — and until this book, it has worked very hard to cover them up.

Lincoln suspended habeas corpus. FDR authorized the internment of thousands of Japanese Americans. Presidents Bush and Obama now must face their own reckoning. Power corrupts, but it is endless war that corrupts absolutely.


Praise For Pay Any Price: Greed, Power, and Endless War…

"Risen’s fast-paced, accessible prose and his finely drawn detail make the book read like an implausible thriller. The tragedy is that, however implausible, it all appears to be true . . . enormously impressive. . . . This is an important and powerful book that should be read by anyone who believes it is time to take stock after 13 years and re-evaluate the nature of the threat the country faces and its response to the atrocity of 9/11."
—New York Times Book Review

"At long last we can retire Bob Woodward and Carl Bernstein as the icons of investigative reporting. With his second book probing the dark tunnels of the so-called war on terror, James Risen has established himself as the finest national security reporter of this generation, a field crowded with first rank talent."
—Newsweek

"A memorable chronicle of the long-range consequences of the panicky reaction of top American officials to the Sept. 11 attacks...Mr. Risen certainly makes the case in this book that America has lost much in its lashing out against terrorism, and that Congress and the people need to wake up and ask more questions about the political, financial, moral and cultural costs of that campaign."
—Tom Ricks, New York Times daily review


"A wide-ranging look at consequences of the so-called war on terror and includes stories of shocking thievery during the U.S. occupation of Iraq."
—Steven Nelson, US News & World Report

"A no-holds-barred tarring and feathering of the past 13 years of the U.S. national security system. At times frightening, Risen’s book is a strong reminder of the importance of a free press keeping a powerful government in check."
—William O’Connor, Daily Beast

"James Risen's Pay Any Price: Greed, Power, and Endless War is a book every member of Congress and every candidate for president in both political parties should be forced to read." — Michael Goldman, Lowell Sun

JAMES RISEN is an investigative journalist with the New York Times, and author of the New York Times bestseller State of War,among other books.  In 2006 he won a Pulitzer Prize for his stories about warrantless wiretapping by the NSA. In 2007 he was elected into the American Academy of Arts and Sciences.