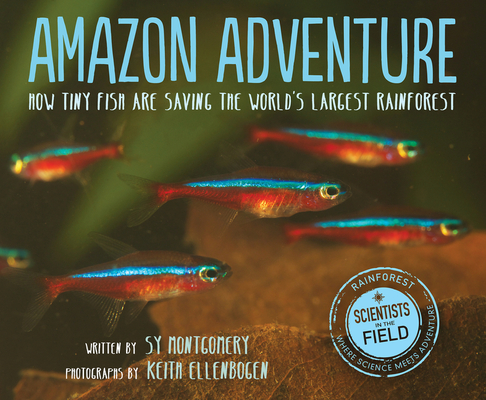 Considered the “lungs of the world,” the Amazon provides a full fifth of the world’s oxygen, and every year unsustainable human practices destroy 2.7 million acres. What can be done to help? That’s where Project Piaba comes in.
Join the award-winning author Sy Montgomery and the photographer Keith Ellenbogen as they traverse the river and rainforest to discover how tiny fish, called piabas, can help preserve the Amazon, its animals, and the rich legacy of its people. Amazon Adventure is an eye-opening—and ultimately hopeful—exploration of how humanity’s practices are affecting and shaping not only the Amazon, but our entire environment.


Praise For Amazon Adventure: How Tiny Fish Are Saving the World's Largest Rainforest (Scientists in the Field Series)…

★ “Montgomery thoroughly mines the social and economic effects the piabas have on locals alongside an in-depth exploration of the Amazon river and its ecosystems. The science and sociology are interesting and unusual, and the narrative itself enthralling…A true-to-form installment in a valuable series.”—Booklist, starred review

★ “Another addition to a spectacular series, this is an eye-opening first purchase for science collections.”—SLJ, starred review

“Their trip is reported smoothly and illustrated with well-chosen photographs…An adventure that might help protect an ecosystem.”—Kirkus

“Color photographs (many underwater) and captivating, take-you-there storytelling immerse readers in the ecosystem…An expansive and engaging story of biological interconnectedness and beauty.”—Publishers Weekly

Keith Ellenbogen is an award-winning underwater photographer with an emphasis on environmental conservation. His images have been published worldwide in newspapers, magazines, and books as well as on TV. He is a Senior Fellow with The International League of Conservation Photographers (iLCP), a Fellow with the Explorers Club, and an Assistant Professor of Photography at the Fashion Institute of Technology / SUNY.