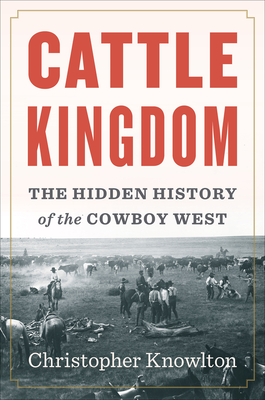 The Hidden History of the Cowboy West

The open range cattle era lasted barely a quarter-century, but it left America irrevocably changed. These few decades following the Civil War brought America its greatest boom-and-bust cycle until the Depression, the invention of the assembly line, and the dawn of the conservation movement. It inspired legends, such as that icon of rugged individualism, the cowboy. Yet this extraordinary time and its import have remained unexamined for decades.

Cattle Kingdom reveals the truth of how the West rose and fell, and how its legacy defines us today. The tale takes us from dust-choked cattle drives to the unlikely splendors of boomtowns like Abilene, Kansas, and Cheyenne, Wyoming. We venture from the Texas Panhandle to the Dakota Badlands to the Chicago stockyards. We meet a diverse array of players—from the expert cowboy Teddy Blue to the failed rancher and future president Teddy Roosevelt. Knowlton shows us how they and others like them could achieve so many outsized feats: killing millions of bison in a decade, building the first opera house on the open range, driving cattle by the thousand, and much more. Cattle Kingdom is a revelatory new view of the Old West.

Praise For Cattle Kingdom: The Hidden History of the Cowboy West…

"Lively...analysis does not bog down the storytelling. Knowlton deftly balances close-ups and bird’s-eye views. We learn countless details…more important, we learn why the story played out as it did.” – The New York Times Book Review

"Cattle Kingdom is the smartly told account of rampant capitalism making its home — however destructive and decidedly unromantic — on the range. Related this way, the story may not include many gunfights, but it offers ample conflict and drama delivered with a fresh and winning perspective." – The Dallas Morning News

"Christopher Knowlton has applied his lifelong passion for Western history in writing the best one-volume history of the legendary era of the cowboy and cattle empires in 30 years. Cattle Kingdom redefines our understanding of the era beyond the traditional boundaries of the West….Knowlton’s flowing prose style is enjoyable to read….Knowlton has added a superb volume to the agricultural, cultural, economic and environmental historiography of cattle ranching and cowboy history in the American West.”—Stuart Rosebrook, True West Magazine

“Cattle Kingdom is the best all-around study of the American Cowboy ever written. Every page crackles with keen analysis and vivid prose about the Old West. A must read!”  – Douglas Brinkley, author of Rightful Heritage: Franklin D. Roosevelt and the Land of America and The Wilderness Warrior: Theodore Roosevelt and the Crusade for America

“Mr. Knowlton writes well about all the fun stuff: trail drives, rambunctious cow towns, gunfights and range wars. What makes it a “hidden history” is the way it enlists all of these tropes in support to an intriguing thesis: that the romance of the Old West arose upon the swelling surface of a giant economic bubble…Cattle Kingdom is The Great Plains by way of The Big Short….His book coasts along just fine on the strength of his curiosity and storytelling ease. And his empathy.”—Stephen Harrigan, The Wall Street Journal

"A fresh look at the U.S. cattle industry...this vastly informative volume will be of interest to general readers and a welcome addition for all library collections." – Library Journal

"Quality book...Knowlton’s absorbing work demonstrates that the years of lucrative cattle driving may have been short, but meatpacking and transportation innovations and the rugged individualist ideology of the West maintain their place of importance in American life. – Publishers Weekly

"An informative and well-written examination of a key area." – Booklist

“Cattle Kingdom accomplishes the rare feat of capturing the worlds of cattlemen and cowboys in all their color, while also covering well the global economic and environmental tides that made the cattle kingdom rise and fall."  – Stephen Aron, 2017 President of the Western History Association and Robert N. Burr Department Chair, UCLA Department of History

"A pleasing contribution to the history of the post-Civil War frontier." – Kirkus Reviews

CHRISTOPHER KNOWLTON is the author of Cattle Kingdom and a former staff writer and London bureau chief for Fortune magazine. He spent fifteen years on Wall Street, most of them as president of Knowlton Brothers, Inc., an investment management firm. He is a trustee of the Teton Raptor Center and the Santa Barbara Museum of Natural History. He and his wife, Pippa, live in Jackson, Wyoming.