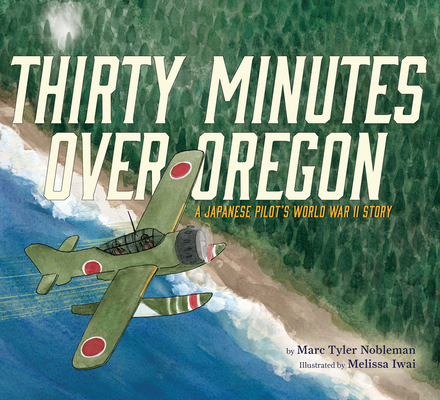 In this important and moving true story of reconciliation after war, beautifully illustrated in watercolor, a Japanese pilot bombs the continental U.S. during WWII—the only enemy ever to do so—and comes back 20 years later to apologize.

The devastating attack on Pearl Harbor, Hawaii, drew the United States into World War II in 1941. But few are aware that several months later, the Japanese pilot Nobuo Fujita dropped bombs in the woods outside a small town in coastal Oregon. This is the story of those bombings, and what came after, when Fujita returned to Oregon twenty years later, this time to apologize.
This remarkable true story, beautifully illustrated in watercolor, is an important and moving account of reconciliation after war.

An Orbis Pictus Honor Book for Outstanding Nonfiction 2019   "A thought-provoking meditation on the power of forgiveness."--The New York Times Book Review   "Nobuo's story of reconciliation, not only for him, but for Japan and the U.S., is powerful and poignant....The story captures a side of World War II readers may not have seen before. A must-read story of a lesser-known World War II event and its aftermath."--Kirkus   "Full-color spreads and vignettes match a clear narrative that pays tribute to a change of heart and the importance of cultural understanding."--Publishers Weekly   "This quiet story is less about war than the toll it takes on those who fight, the possibility of reconciliation, and the value of understanding other cultures. The fluid, emotionally resonant ink-and-watercolor illustrations create period scenes effectively while capturing the tone of the text. A war story with a heartening conclusion."--Booklist   "Nobleman knows just the right tone to strike with this story, and he unfolds its events with a storyteller’s flair."--The Horn Book Magazine