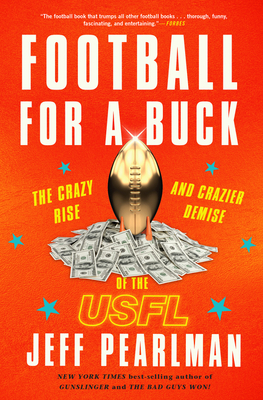 Football For A Buck

From Jeff Pearlman—the New York Times best-selling author of Three Ring Circus—comes the rollicking, outrageous story of the USFL, full of larger-than-life characters and you-can’t-make-this-up stories featuring some of the biggest celebrities and buffoons in the game.
The United States Football League—known fondly to millions of sports fans as the USFL—did not merely challenge the NFL, but cause its owners and executives to collectively shudder. In its three seasons from 1983-85, it secured multiple television deals, drew millions of fans and launched the careers of legends such as Steve Young, Jim Kelly, Herschel Walker, and Reggie White. But then it died beneath the weight of a particularly egotistical and bombastic team owner—a New York businessman named Donald J. Trump.
In Football for a Buck, Jeff Pearlman draws on more than four hundred interviews to unearth all the salty, untold stories of one of the craziest sports entities to have ever captivated America. From 1980s drug excess to airplane brawls and player-coach punch outs, to backroom business deals and some of the most enthralling and revolutionary football ever seen, Pearlman transports readers back in time to this crazy, boozy, audacious, unforgettable era of the game. He shows how fortunes were made and lost on the backs of professional athletes and how, forty years ago, Trump was already a scoundrel and a spoiler.
For fans of Terry Pluto’s Loose Balls or Jim Bouton’s Ball Four and of course Pearlman’s own stranger-than-fiction narratives, Football for a Buck is sports as high entertainment—and a cautionary tale of the dangers of ego and excess.


Praise For Football For A Buck: The Crazy Rise and Crazier Demise of the USFL…

JEFF PEARLMAN is the New York Times best-selling author of eight books, including Football for a Buck,The Bad Guys Won!, Boys Will Be Boys, Showtime, Sweetness, and Gunslinger. He lives in Southern California with his wife, Catherine, and children, Casey and Emmett. He is the host of the Two Writers Slinging Yang podcast and blogs regularly at jeffpearlman.com.
Loading...
or
Not Currently Available for Direct Purchase