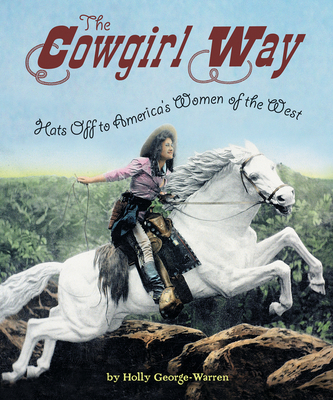 Hats Off to America's Women of the West

The 1840s ushered in the beginning of the largest migration in US history. People in crowded Eastern cities and Missouri River towns were feeling the pull of the Western frontier. It was the dawn of a new era of expansion, and over the next few decades, the making of a new kind of pioneer. It was the birth of the cowgirl!

Welcome to the world of nimble equestriennes, hawkeyed sharpshooters, sly outlaws, eloquent legislators, expert wranglers and talented performers who made eyes pop and jaws drop with their skills, savvy and bravery. In this fascinating account of an ever-evolving American icon, Holly George-Warren invites readers to saddle up with a host of these trailblazers who helped settle the West and define the cowgirl spirit.


Praise For The Cowgirl Way: Hats Off to America's Women of the West…

"There are plenty of books about cowboys. Now it’s the ladies’ turn. . . . This offers a refreshing slant on the West and its women. Best of all are the many, many wonderfully reproduced photographs, posters, and even paper dolls that chronicle the history in this handsomely designed book."  —Booklist "With ample dynamic photos and lively quotes throughout, George-Warren presents a thoroughly absorbing overview of the history of cowgirls up to the present."  —School Library Journal "Thoroughly researched and filled with interesting facts, photographs and full-color art, the book shines in its ability to highlight a neglected story in American history. . . . George-Warren tells their stories in colorful, fascinating detail. This book would make an excellent addition to a unit on the American West or a celebration of Women's History Month."  —VOYA "For horse-loving girls, this unique title meets a need they may not have known they had and might spur them on to cowgirl careers of their own."  —Horn Book

Holly George-Warren is an award-winning writer, editor, producer, and music consultant. She has contributed to more than two dozen books about rock and roll, including The New Rolling Stone Encyclopedia of Rock & Roll, The Rolling Stone Book of Women in Rock, and The Rolling Stone Illustrated History of Rock & Roll. She’s also written for the New York Times, the Village Voice, the Journal of Country Music, and Rolling Stone. Ms. George-Warren lives in upstate New York with her family. Visit her online at www.hollygeorgewarren.com.
Loading...
or
Not Currently Available for Direct Purchase