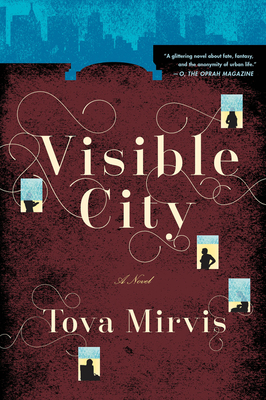 “A glittering novel about fate, fantasy, and the anonymity of urban life.” —O, The Oprah Magazine

“Read Visible City. Tova Mirvis’s graceful yet vigorous New York novel is about the half-inadvertent window-peeping that city life enables, and where it can lead.” —New York Magazine

After chaotic days of wrangling and soothing her young children, Nina spends her evenings spying on the quiet, contented older couple across the street. But one night, through her same window, she spies a young couple in the throes of passion. Who are these people, and what happened to her symbol of domestic happiness? Soon, Nina crosses paths with both couples on the streets of her Upper West Side neighborhood and, as anonymity gives way to different forms of intimacy, all begin to confront their own desires and disappointments. Shrewdly and artfully, Mirvis explores the boundaries between our own lives and the lives of others. From its lavish ghost subway stations to its hidden stained-glass windows, Visible City conjures a New York City teeming with buried treasures.

“An utterly perfect, deeply moving evocation of contemporary Manhattan [that] reminded me of Paula Fox and Laurie Colwin, and also those master chroniclers of the privileged classes, Wharton and Fitzgerald . . . Brilliant.” —Joanna Smith Rakoff, Salon.com

“In a glittering novel about fate, fantasy, and the anonymity of urban life, a lonely New York City woman uses her son’s toy binoculars to spy on couples whose intimacy she craves.” — O, The Oprah Magazine

“Mirvis’s meticulously choreographed novel surprises and moves us. She shows the city for what it is behind all its windows and walls: a vast constellation of those ‘truthful moments’ her heroine seeks, as numerous as the stars.”  — New York Times Book Review

“A complex novel about intersecting lives . . . [that] paints a wry, funny portrait of an Upper West Side in turmoil, where harried mothers endlessly ponder their skills at ‘parenting’ . . . What makes Visible City interesting is Mirvis’s humane, intelligent perception of the emotional lives of her characters.” — Wall Street Journal

“Read Visible City. Mirvis’s graceful yet vigorous New York novel is about the half-inadvertent window-peeping that city life enables, and where it can lead.” — New York Magazine

“Both a paean and a lament for a world contained within one neighborhood . . . [Visible City] brilliantly unfurls connections that overlap and intersect between strangers and lovers . . . Arresting.” — Jewish Daily Forward

“Mirvis won me over with her empathy with her characters, whose inner lives she probes with subtle insight and style in Visible City . . . Achingly well told.” — Minneapolis Star Tribune

“In this story of three unfulfilled couples living in Manhattan, Mirvis captures a prevalent inner struggle: the desire for change versus the fear of the unknown . . . Through these characters’ feelings of fear, regret, and discontent, I was reminded never to lose sight of what brings me happiness.” — Real Simple, a Best Book of 2014

“Such is Mirvis’s finesse and insight that she leaves the reader completely sympathetic with each character’s dilemmas . . . Visible City is a beautifully rendered novel that takes on art, parenting, betrayal and the nature of love.” — Shelf Awareness

“Mirvis writes tenderly of love and loneliness, chance encounters and tough decisions. She captures the competitive edge of mothers so devoted to their kids’ enrichment and, also, their own buried feelings of desperation. With humor, she gets the details right . . . [and] masterfully renders life along upper Broadway and Riverside Park.” — Jewish Week

“By the time she has knitted up all the delicate threads of her story, Mirvis reveals that freedom often involves the acceptance of responsibility, rather than simply casting off the fetters that bind us to daily life. Through Nina’s eyes, she offers a radiant vision of her characters’ newly discovered liberation and of the infinitely complex, extraordinary city in which that kind of reinvention can come to feel like a possibility every day.” — Bookreporter.com

“Mirvis writes an intimate story about different types of relationships, including those with complete strangers . . . In this story of chance and the temptation of change, Mirvis elicits the reader’s sympathy for her characters’ conflicting desires.” — Publishers Weekly

“At night, Nina went outside and looked at the houses beyond the fence. From here it was hard to know what really went on in people’s lives” (p. 135). Nina has a history of curiosity. What draws her to other people’s stories? Do you think this type of curiosity will continue?

Sooner or later, someone would always know. Fifty blocks from home or five hundred, privacy was generally an illusion” (p. 154). Why does Leon think this? Do you think privacy is an illusion? Considering certain current events surrounding privacy online and the NSA’s intrusion on citizen’s privacy, how do you perceive privacy now? How do you keep your private life private?

“How wrong she had been to think she could gaze out unaffected” (p. 177). How does watching other people change Nina?

Why for so many years had she tucked away the feeling that she was invisible?” (p. 205). Why does Claudia feel invisible? What does Claudia hide from those around her, and what does she only think she hides? How does this affect her relationships with those she loves? Do any of the other characters do this as well?

In this book, change is necessary, liberating, but it can also be a betrayal—not just for the characters, but also for the neighborhood itself. Why is it sometimes easier to orbit around the lives of others than to inhabit the center of one’s own world? Also, when we make permanent situations that are based on only partial truths, what happens when other truths start clamoring for recognition?

When Nina visits Leon’s apartment, he says “we're much closer” (p. 137) to the construction. To Max the building going up is a source of endless fascination; to Claudia it is an appalling nuisance. Leon welcomes it even as he recognizes what it will mean for the status quo. Jeremy's relationship to it is at first much more practical and hands on and of course undergoes the most radical shift. What does each character’s reaction to the new construction reveal about himself or herself?

Visible City is full of forbidden spaces, from Jeremy’s explorations to Emma’s story of the night zoo and Nina and Leon’s relationship. What draws the characters to these spaces?

Explore why Claudia loves the art of stained glass. What does it say about her character?

How are several of the characters trapped by their narrowing paths? Is it possible for them to integrate the many sides of themselves? And how does this challenge relate to the lure of new romance, the temptation to believe in the possibility of unearthing a hidden masterpiece?

“The prospect of concealing scared her as much as revealing. Would she rather stay hidden or be found?” (p. 239). Discuss the nature of secrets. What is the allure of a secret? Is it possible for a secret to stay a secret? Or is it human nature to want to both discover and be discovered?

How is the perception Nina has of Claudia and Leon’s relationship from watching them through the window incorrect? What does this say about how much we can know other people without talking to them? At what point do you really know another person?

Discuss Nina’s transformation as a mother. Why does she have trouble relating to the other mothers in her neighborhood? Are the other mothers as united as she perceives them to be? What sort of commentary do these various parents offer on contemporary child-rearing philosophies?

Claudia, Nina, and Emma represent three different generations of women, all at a crossroads with their partners. What are some of the different issues they face as women? And what similar struggles do they face? Do you think their outcomes are remarkable or inevitable?

Do you think the three couples’ stages of life factor in to what they ultimately decide?

Consider the title of the book. How much of the book is about what can be seen versus what can’t be seen? What are some of the invisible things it explores?