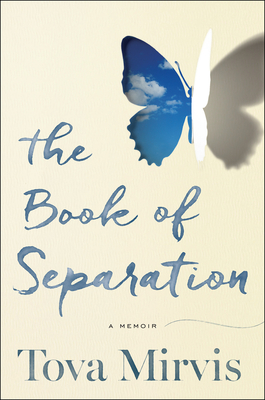 The Book of Separation

The memoir of a woman who leaves her faith and her marriage and sets out to navigate the terrifying, liberating terrain of a newly mapless world

Born and raised in a tight-knit Orthodox Jewish family, Tova Mirvis committed herself to observing the rules and rituals prescribed by this way of life. After all, to observe was to be accepted and to be accepted was to be loved. She married a man from within the fold and quickly began a family.

But over the years, her doubts became noisier than her faith, and at age forty she could no longer breathe in what had become a suffocating existence. Even though it would mean the loss of her friends, her community, and possibly even her family, Tova decides to leave her husband and her faith. After years of trying to silence the voice inside her that said she did not agree, did not fit in, did not believe, she strikes out on her own to discover what she does believe and who she really is. This will mean forging a new way of life not just for herself, but for her children, who are struggling with what the divorce and her new status as “not Orthodox” mean for them.

This is a memoir about what it means to decide to heed your inner compass at long last. To free the part of yourself that has been suppressed, even if it means walking away from the only life you’ve ever known. Honest and courageous, Tova takes us through her first year outside her marriage and community as she learns to silence her fears and seek adventure on her own path to happiness.

Praise For The Book of Separation: A Memoir…

"Tova Mirvis has already established herself as a first-rate novelist with The Ladies Auxiliary, The Outside World, and Visible City. With The Book of Separation: A Memoir, Mirvis shifts genres, reveals some of the autobiographical germs of her fiction, and compellingly chronicles the process of separating from Orthodoxy...The respect for intra-Jewish difference that Mirvis models for her children—and for readers—is a precious gift to the Jewish literary world...Beautiful and poignant."
—Lilith Magazine

“An intimate tale of departure….[Tova Mirvis] movingly conveys the heartache that accompanies the abandonment of one way of life in search of another.”
—New York Times Book Review, An Editors' Choice

"In this poignant memoir, Mirvis chronicles her decision, at 40, to finally listen to the voice in her head telling her to leave her religion, her marriage, and her family. She explores what it means to truly be yourself, even if it means giving up everything you’ve ever known."
—Real Simple, "The Best New Books to Read This Month"

"We've all daydreamed about walking away from it all. Mirvis actually did, after years of soldiering through a good-enough life. This is the moving story of her life, post-divorce and post-Orthodox Judaism. She's an inspiring example of living—and loving—​on your own terms."
—Glamour

"Capable of both wry humor and darkly apt turns of phrase, Mirvis is a gifted writer reflecting on her identity: first through the prism of organized religion, then through a self-charted life."
—Chicago Tribune

“A beautifully written book…in which Mirvis applies her gifts as a novelist to reveal her own struggles. And it is a profound meditation on what it means to be true to oneself, and what costs doing so may exact.”
—The Jewish News of Northern California

"Mirvis's experience of Orthodox Judaism is vivid and particular, but her questions—about love and belonging, community and isolation, striking out into new soul terrain without a map—are universal. Luminous, unsettling and fiercely brave, Mirvis's memoir insists on a simple but earth-shattering truth: 'there are other ways to be.'"
—Shelf Awareness, Starred Review

"The author's sensitive thematic treatment of belonging and individuality and her candor about the terror she experienced leaving the only community she had ever known makes for moving, inspiring reading. A thoughtful, courageous memoir of family, religion, and self-discovery."
—Kirkus Reviews

"Mirvis intimately chronicles her divorce and her separation from modern Orthodox Judaism in this bold memoir...Hers is a story of grief and rebirth. She is compassionate and judicious in her portrayal of Orthodox Judaism, even as she describes its repressive attitudes toward women; she discusses the diverse Jewish lifestyles, from Hasidic to secular. Her personal journey makes for an introspective and fascinating story."
—Publishers Weekly

"As [Mirvis] begins her memoir, she documents what it feels like to leave her husband and religion...The author has shared custody of three school-age children and a budding romance, both of which she negotiates with gentle aplomb. Her interior narrative voice draws readers in, asking if she can be loved for who she is, not who she was, especially in her withdrawal from her natal religion. VERDICT: A soothing picture of personal and religious divorce."
—Library Journal

"Looking both backward and forward, Mirvis recounts with candor and close observation the social, psychological, and spiritual travail precipitated by leaving her narrow but well known world and entering a more secular, unfamiliar territory. Her tale revisits the seeds of doubt that first troubled her as a young, Orthodox woman as well as the upheaval she feared and resisted while those doubts matured into an irresistible urge to depart from all that was intimately familiar to her. Sharing the personal details and drama of her journey, Mirvis recounts the arduous path so many must take to emerge into their own, true identities."0
—Booklist

"[Mirvis] detail[s] her journey with grace and subtlety."
—Improper Bostonian

“Tova Mirvis offers a warmly told and searchingly explored story of her divorce from both her first husband and her Orthodox Jewish faith. The intimate view of what it means to live an orthodox life—the day to day reality of following its many guiding rules and principles—is fascinating to an outsider like me, and Tova’s insights are both thought-provoking and generous. As she sorts through what pushed her away from the faith and traditions she grew up with, she also conveys what held her; her conflict over her ‘separation’ becomes our own.”
—Jessica Shattuck, New York Times bestselling author of The Women in the Castle

“The Book of Separation is an elegant, beautiful, carefully drawn story of love, tradition, inner conflict, and loss. This extraordinary memoir resonated with me more than I can say.”
—Dani Shapiro, bestselling author of Devotion and Hourglass: Time, Memory, Marriage

“To say that reading The Book of Separation made me feel less alone in the world would be a vast understatement. Tova Mirvis perfectly, beautifully, unsettlingly captures the particular horror—existential and otherwise—of dismantling a long marriage and starting one’s life anew. This is a heartbreaking, breathtaking, life-altering book.”
—Joanna Rakoff, author of My Salinger Year“In The Book of Separation, Tova Mirvis brings us into her heart-wrenching decision to leave her marriage and the world of Orthodox Judaism behind. Her exploration of faith and self are truly miraculous. This book is a wonder!”
—Ann Hood, author of The Book that Matters Most

"With elegance, rare depth and unflinching honesty, Tova Mirvis offers up a chronicle of one woman’s revolution against her own life. The Book of Separation is fiercely inspiring, and illuminates the too often dormant power within all of us to live in accordance with who we truly are."
—Heidi Pitlor, author of The Daylight Marriage

“Tova Mirvis’s memoir, beautifully written and fiercely honest, is a moving reflection on what it means to take responsibility for one’s own life.  In the course of the book Mirvis takes leave of her husband, her religious community, and her inherited notions of how her life ought to go.  By staring so unflinchingly into her confusions and fears, a portrait of quiet courage slowly assembles itself, radiating insights and inspiration for all.”
—Rebecca Newberger Goldstein, author of Plato at the Googleplex