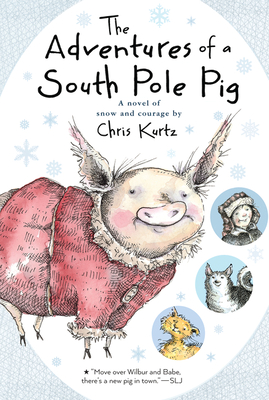 The Adventures of a South Pole Pig

A novel of snow and courage

Flora the pig was born for adventure: “If it’s unexplored and needs to get dug up, call me. I’m your pig,” she says. The day Flora spots a team of sled dogs is the day she sets her heart on becoming a sled pig. Before she knows it, she’s on board a ship to Antarctica for the most exhilarating—and dangerous—adventure of her life. This poignant novel of a purposeful pig is sure to become a favorite with any young readers who have ever dreamed of exploring the great beyond.

Praise For The Adventures of a South Pole Pig: A novel of snow and courage…

"It will greatly satisfy fans of Dick King-Smith and E.B. White looking for something similar . . . Engaging fantasy adventure for preteen pig pals."
—Kirkus

"There's humor as well as heart, grit as well as tenderness in the telling of this Antarctic adventure tale."
—Booklist

"Loyalty, courage, and optimism are important ideas, and newcomer Kurtz brings us a rollicking story filled with all three."
—Horn Book, starred review

"Told in the voice of a seasoned storyteller, this novel has chapters that will work perfectly for sharing aloud with younger children or as a read-alone for more competent readers. . . . Move over Wilbur and Babe, there's a new pig in town."
—School Library Journal, starred review

Chris Kurtz is a talented teacher, storyteller, and writer. In addition to The Adentures of a South Pole Pig, he wrote the middle-grade novel The Pup Who Cried Wolf and has co-written picture books with his sister Jane Kurtz. He lives in Portland, Oregon, with his family.
Loading...
or support indie stores by buying on