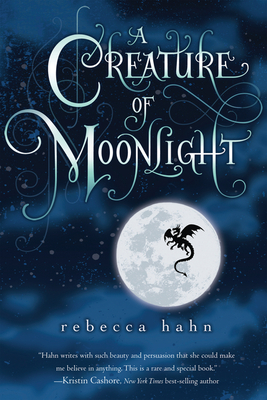 A Creature of Moonlight

Sixteen-year-old Marni lives with her Gramps in a one-room shack, cultivating a magnificent flower garden that attracts villagers and noblemen alike. Only the invasive blue dragon flowers in her garden belie Marni’s secret: She is the niece of the king and the daughter of a dragon. When events force Marni to claim her rightful place as princess in her uncle’s court, King Roderick eyes the dragon-born girl with suspicion, blaming her for the enchanted, rapidly encroaching woods that are destroying his kingdom. Will the king kill Marni, as he did her mother, or will Marni get her revenge first? A rich, compelling fantasy for the wild at heart.


Praise For A Creature of Moonlight…

“Hahn writes with such beauty and persuasion that she could make me believe in anything. She writes the sort of prose you give yourself to willingly. This is a rare and special book, a magical book; I’ve been searching for it and didn’t even know it.”
—Kristin Cashore, New York Times best-selling author of Graceling and Bitterblue “Rebecca Hahn captures that elusive sense of an experience just out of reach—a memory, a dream, a voice in the woods, a road not taken. I love the book and hope she dreams up many more.”
—Franny Billingsley, National Book Award finalist for Chime

* "In Hahn's polished, confident debut, the daughter of a runaway princess and a dragon comes of age...this profound and original story feels like a long-lost classic fairy tale."
—Publisher's Weekly, starred review

"This debut novel is abundant with both magical images and realistic family conflict, melding them into a compelling story."
—VOYA

"This book's greatest strength lies in the vivid woodland scenes and the rich detail that describes the mystical pieces of Marni's tale."
—School Library Journal

* "A dreamlike, poetic fantasy bildungroman explores the power of choice and the meaning of home...Hahn's debut is cumulatively stunning"
—Kirkus, starred review

"Told in a languorous, breathy first-person narrative, Hahn's debut novel follows tenacious Marni as she tries to find a home between to vastly different worlds."
—Booklist

* "This is fairy-tale fantasy as its best, with evocative prose and simple storytelling deftly conveying a powerful emotional core that will haunt readers long after the pages end."
—Bulletin, starred review
"An eloquent story about free will, the meaning of home, and love's varied forms."
—Horn Book Magazine —

Rebecca Hahn grew up in Iowa, attended college in Minnesota, and soon afterward moved to New York City, where she worked in book publishing and wrote A Creature of Moonlight on the side. She now lives in California. Visit her at www.rebeccahahnbooks.com.