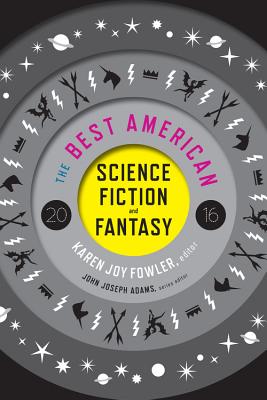 From quiet, elegiac, contemporary tales to far-future, deep-space sagas, the stories chosen by series editor John Joseph Adams and guest editor Karen Joy Fowler for The Best American Science Fiction and Fantasy 2016 demonstrate the vast spectrum of what science fiction and fantasy aims to illuminate, displaying the full gamut of the human experience, interrogating our hopes and our fears—of not just what we can accomplish or destroy as a person, but what we can accomplish or destroy as a people—and throwing us into strange new worlds that can only be explored when we shed the shackles of reality.

KAREN JOY FOWLER, guest editor, is the author of six novels and four short story collections, including We Are All Completely Beside Ourselves. She is the winner of the 2014 PEN/Faulkner Award, a finalist for the Man Booker Prize, and has won numerous Nebula and World Fantasy awards.

JOHN JOSEPH ADAMS, series editor, is the best-selling editor of more than two dozen anthologies, including Brave New Worlds and Wastelands. He is the editor and publisher of the digital magazines Lightspeed and Nightmare and is the editor of John Joseph Adams Books, a new science fiction/fantasy novel imprint from Houghton Mifflin Harcourt.

Praise For The Best American Science Fiction And Fantasy 2016…

"A thoughtful array from a star-studded assemblage of writers. . . . [whose] subject matter travels far and wide in time, space, and human memory." —Publishers Weekly   "Intellectually demanding. . . . A very elite, highly curated set of stories; an obvious taste is at work." —Kirkus Reviews, Starred Review   "A standout. The initial entry was a huge success, and 2016 editor Karen Joy Fowler brings a unique, refreshing perspective to this curated collection of the year’s best sci-fi and fantasy short stories. Salman Rushdie, Charlie Jane Anders, Kelly Link, and Dexter Palmer lead a strong field of contributors who offer up some of modern genre’s best writing and most intriguing ideas."—B&N SciFI & Fantasy Blog   “All in all, this second edition provides a comprehensive overview of the themes and troupes of science fiction and fantasy that continue to fascinate readers. . . the impact of the stories more than makes up for its comparatively smaller package. Highly recommended, especially for those interested in the finest short stories the two genres produced over the past year, but missed reading them when originally published.” —Bookgasm  "The second edition to the Best American Science Fiction and Fantsy, edited by Karen Joy Fowler (Mariner), is just as strong as the first, if not stronger. . . . With heavy-hitting authors such as Salman Rushdie, Anders and Sofia Samatar, this volume showcases the nuanced, playful, ever-expanding definitions of the genre and celebrates its current renaissance." —The Washington Post   "There has never been a better time in science fiction and fantasy short fiction, and you need look no further than this collection to see that truth. Within, you will find magic, aliens, dystopia, fairy tales, terrifying technology, far-flung futures, uncanny planets, and more. But you’ll also find heartbreak, laughter, compassion, complex morality, acceptance, strength in numbers, love, justice, the absurd, and the bittersweet. Let this collection take you to lands uncharted, and lands unknown, and lands unseen—you will be glad you went, and in these countries, there is something for everyone." —Tor.com —

KAREN JOY FOWLER is the author of six novels and four short story collections, including We Are All Completely Beside Ourselves and Black Glass. She is the winner of the 2014 PEN/Faulkner Award, a finalist for the Man Booker Prize, and has won numerous Nebula and World Fantasy Awards.