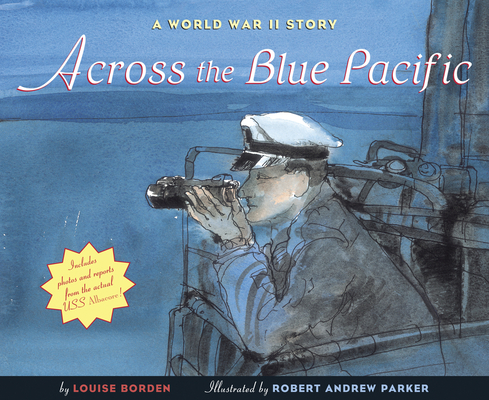 Across the Blue Pacific (Paperback)

When the United States enters World War II, Molly is attending Beechwood Elementary. But her thoughts are with Ted Walker, her neighbor, who is serving aboard a cruiser in the South Atlantic.

Three years later, the war is still going on and Molly is in the fourth grade. Ted is still at sea, as a naval officer of the USS Albacore, a submarine in the Pacific Ocean. Orchard Road feels like the safest place on earth, but somewhere on the other side of the world, Ted and his crew are carrying out dangerous missions. No one knows when they will come home, and young Molly must find a way to live with fear during wartime.

Robert Andrew Parker is a fine artist and printmaker whose work often appears in publications such as The New Yorker. His numerous children’s books include To Fly: The Story of the Wright Brothers, Across the Blue Pacific: A World War II Story, and Grandfather Tang’s Story. He lives in West Cornwall, Connecticut.

Louise Borden is the highly regarded author of many books, including Good Luck, Mrs. K!, Sleds on Boston Common, Good-bye, Charles Lindbergh and The Little Ships: The Heroic Rescue at Dunkirk in WW II, published by Margaret McElderry Books, and The Journey That Saved Curious George, Across the Blue Pacific, and His Name Was Raoul Wallenberg, published by HMH. She lives with her husband, Pete, in Cincinnati, Ohio, and has three grown children. Her website can be found at www.louiseborden.com.

Praise For Across the Blue Pacific: A World War II Story…

"Though this story of loss is set in the 1940s, its message is timeless. . . . The retrospective narrative lends Molly's sorrow distance without diluting its significance; it also allows her to commend the wisdom of such remembrance." --Horn Book Horn Book

"This elegant book speaks to the far-reaching effects of war and the healing power of memory." Publishers Weekly
or
Buy Here
Copyright © 2020 American Booksellers Association