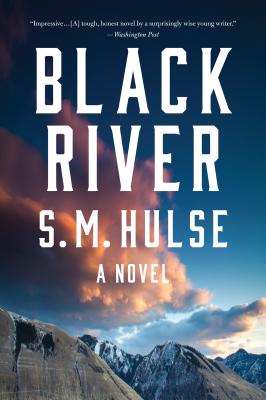 “A complex and powerful story—put Black River on the must-read list.” — Seattle Times

Wes Carver returns to his hometown—Black River, Montana—with two things: his wife’s ashes and a letter from the parole board. The convict who once held him hostage during a prison riot is up for release. For years, Wes earned his living as a corrections officer and found his joy playing the fiddle. But the riot shook Wes’s faith and robbed him of his music; now he must decide if his attacker should walk free. With “lovely rhythms, spare language, tenderness, and flashes of rage” (Los Angeles Review of Books), S. M. Hulse shows us the heart and darkness of an American town, and one man’s struggle to find forgiveness in the wake of evil.

“Hulse believes that grace happens in a look between two people, or a moment of holding back. A powerful elegy.” — Guardian

Winner of the 2015 Reading the West Book Award  A PEN/Hemingway Finalist  Washington State Book Award Finalist  Long-listed for the 2015 Center for Fiction First Novel Prize  Semifinalist for the VCU Cabell First Novelist Award  Short-listed for the Reading the West Book Awards Named an Honor Book for the 2015 Montana Book Award  Nominated for the ?International Dublin Literary Award 2017 February 2015 Indie Next Title  An ABA's Winter/Spring 2015 Indies Introduce title One of the Seattle Times's "Best Books of 2015" Named One of the Choice Books by the RUSA Committee(ALA)   "This Montana-based story, about a prison guard who returns to his hometown after decades away, is an intricate work that layers faith with broken promises, broken bones, and broken hearts. This is a story of people shaped irrevocably by place and circumstance."—Seattle Times, "Best Books of 2015" "A promising debut...the lyrical landscapes and the emotional weather are in place." --John Williams, The New York Times   "Impressive...[a] tough, honest novel by a surprisingly wise young writer." --Ron Charles, The Washington Post   "Hulse evokes the Montana landscape in lyrical, vivid prose...[she] is a gifted wordsmith with promising dramatic instincts." --The Boston Globe   "The assured rhythms of the language convey grace, restraint, insights, power, and beauty. Black River transcends its setting and the circumstances of a few people in a small Montana town to say something true and enduring about violence and families, and grief and compassion." -- Los Angeles Review of Books   "Transcending its genre-fiction setting, Black River is a powerful meditation on faith, family and redemption set in present-day Montana."--The Guardian   "This first novel pulses with dramatic tension and emotional resonance... Hulse’s story is lyrical, elegiac and authentic. Watch for it on best-of-the-year lists."  -- BBC Culture    "This top-of-the-line modern American Western debut explores the themes of violence, revenge, and forgiveness with a sure hand...From the bluegrass theme to the Western rural setting, Hulse handles his story like a pro."--Publishers Weekly, starred and boxed review   "Heads up—Hulse is a smart writer, able to reveal her character’s gut-level emotions and trickiest self-manipulations. Comparing the author to Annie Proulx, Wallace Stegner, or Kent Haruf is no exaggeration. Her debut is bound to turn readers’ hearts inside out and leave them yearning for some sweet, mournful fiddle music." --Library Journal, starred review   "Hulse debuts with a stark, tender tale about one man's quest for faith and forgiveness...By making Wes' suffering so palpable, Hulse makes it even more moving when, in the novel's final pages, he achieves something he's been seeking for a very long time: grace. Profound issues addressed with a delicate touch and folded into a strong story populated by wrenchingly human characters: impressive work from a gifted young artist." --Kirkus, starred review   "Hulse clearly loves Montana, and her own fiddle playing and knowledge of horses shine through the novel. She maintains suspense and manages to avoid the clichés of redemption stories in this assured debut." --Booklist, starred review  "Black River tackles themes of Old Testament proportion—the inheritance of sin, deliverance and damnation, good and evil. Its characters wrestle —

S. M. HULSE received her MFA from the University of Oregon and was a fiction fellow at the University of Wisconsin–Madison. Her stories have appeared in Willow Springs,Witness, and Salamander. A horsewoman and fiddler, she has spent time in Washington, Montana, Idaho, and Oregon.

As the novel switches perspectives between Wesley and Claire, the tense also changes: Claire’s accounts are in the present tense, while Wesley’s are in the past tense. Why do you think the author chose this approach? How did it affect your reading of the book?

How does Claire’s story, told from her point of view, alter or complicate the central narrative, told from Wesley’s perspective?

Do you believe that Bobby Williams’s jailhouse conversion to Christianity was authentic, or that he is, as Wesley asserts to his brother-in-law Arthur, a sociopath just trying to con the parole board with a story of rebirth and reform?

Wesley’s reaction to Williams’s torture seems to be divided between anxiety about how others perceive him (when they see his hands and the scars on his arm) and how he perceives himself (when he wrestles with the loss of his ability to play the fiddle). What do you think was the most profound impact of the trauma?

Were you curious to learn the details of what happened to Wesley during the prison riot, or did you dread reading the description?

What role do you think Scott plays in Wesley’s journey toward peace in the town of Black River?

What was your reaction to Scott’s suicide? How did that plot development affect your opinion of the novel as a whole?

On page 171, as Wesley reflects on Scott’s death at the railroad crossing, Hulse writes: “He was starting to know something he didn’t want to know, had been starting to know it ever since Dennis first told him about Scott. He’d kept it at bay . . . and he knew he’d better not come to know it for certain while he was with Dennis.” What do you think Wesley was beginning to realize? Did your interpretation of this moment change as you read further?

Both Dennis and Wesley bear responsibility for the difficult nature of their relationship—but is it shared equally between them? Or is one of them more at fault for the tensions between them?

The novel ends with Wesley and Dennis, “father and son” beginning a conversation. In your opinion, how will the events that unfolded after Wesley’s return to Black River influence that conversation? What do you think the novel suggests the future holds for the two men?