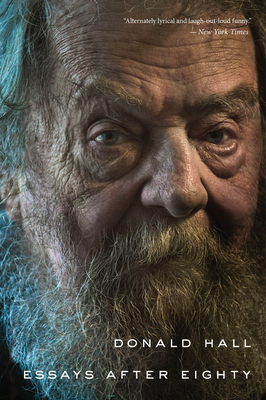 “Deliciously readable . . . Donald Hall, if abandoned by the muse of poetry, has wrought his prose to a keen autumnal edge.” — Wall Street Journal

His entire life, Donald Hall dedicated himself to the written word, putting together a storied career as a poet, essayist, and memoirist. Here, in the “unknown, unanticipated galaxy” of very old age, his essays startle, move, and delight. In Essays After Eighty, Hall ruminates on his past: “thirty was terrifying, forty I never noticed because I was drunk, fifty was best with a total change of life, sixty extended the bliss of fifty . . .” He also addresses his present: “When I turned eighty and rubbed testosterone on my chest, my beard roared like a lion and gained four inches.”  Most memorably, Hall writes about his enduring love affair with his ancestral Eagle Pond Farm and with the writing life that sustains him every day: “Yesterday my first nap was at 9:30 a.m., but when I awoke I wrote again.”

“Alluring, inspirational hominess . . . Essays After Eighty is a treasure . . . balancing frankness about losses with humor and gratitude.” — Washington Post

“A fine book of remembering all sorts of things past, Essays After Eighty is to be treasured.” — Boston Globe