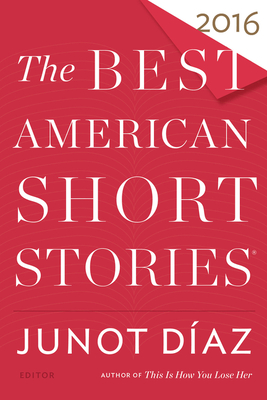 “The literary ‘Oscars’ features twenty outstanding examples of the best of the best in American short stories.” —Shelf Awareness for Readers

will be selected by Pulitzer Prize winner Junot Díaz. He brings "one of the most distinctive and magnetic voices in contemporary fiction: limber, streetwise, caffeinated and wonderfully eclectic" (Michiko Kakutani, The New York Times) to the collection.

"This terrific and surprising collection of tales by a diverse group of writers lives up to Diaz’s “rah-rah” (his term) rallying cry for the form... Count on them to transport you." —USA Today

"Its strongest installment yet... Díaz’s compilation is the most diverse and inclusive entry to date of any of the major annual story collections... Essential for every student of the short story form." —Kirkus Reviews, Starred Review

"This year’s collection brings together fine stories by famous fiction writers like Chimamanda Ngozi Adichie and Karen Russell... [while] a great deal of the magic is generated by the appearance of less familiar names... Each of these outstanding stories is, as Diaz observes, a chance to listen 'to some other lone voice struggling to be heard against the great silence.'” —The National Book Review

Pulitzer Prize–winner Junot Díaz had established himself as a major writer with Drown before his novel, The Brief Wondrous Life of Oscar Wao, was named Time's #1 Fiction Book of the Year and spent more than one hundred weeks on the New York Times bestseller list. Díaz has won a host of major awards and prizes, including the National Book Critics Circle Award, the PEN/Malamud Award, the PEN/O. Henry Prize, the Dayton Literary Peace Prize, and the Anisfield-Wolf Award.