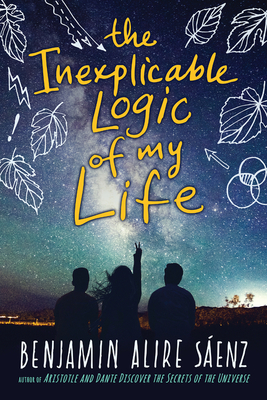 The Inexplicable Logic Of My Life

“Benjamin Alire Sáenz returns with another beautifully written story of friendship, family, grief, and belonging. My heart aches after spending a few days with Salvador, Sam, Vicente, Mima, and Fito. All I can say is, I wish I had Sáenz’s writing when I was a teenager, and even more so when I first moved to Texas from México. He represents a people, an experience, with delicate and charming storytelling. But his writing is never directed to one specific age range or only the Mexican-American experience—it is writing for everyone. I am ready for his next book.”
— Eugenia Vela, BookPeople, Austin, TX
View the List

A “mesmerizing, poetic exploration of family, friendship, love and loss” from the acclaimed author of Aristotle and Dante Discover the Secrets of the Universe. (New York Times Book Review)

Sal used to know his place with his adoptive gay father, their loving Mexican American family, and his best friend, Samantha. But it’s senior year, and suddenly Sal is throwing punches, questioning everything, and realizing he no longer knows himself. If Sal’s not who he thought he was, who is he?
This humor-infused, warmly humane look at universal questions of belonging is a triumph.


Praise For The Inexplicable Logic Of My Life…

“[A] mesmerizing, poetic exploration of family, friendship, love and loss. In Sal, Sáenz gives his readers a young man equal parts strong, vulnerable, wise and loving.”  - New York Times Book Review   "Sáenz’s optimistic view of young people — and adults in general — shines through and lifts the reader up." - Hypable.com    "This new novel has all the same qualities that made you fall in love before: deeply human protagonists, a gentle, warm manner of addressing difficult issues, and finding a sense of identity." - Bustle   "Saenz is a treasure whose works should not be missed..." —VOYA   "Sáenz’s distinctive prose style is lyrical and philosophical..." —Horn Book   ? "The themes of love, social responsibility, death, and redemption are expertly intertwined with well-developed characters and acompellingstory line. This complex, sensitive, and profoundly moving book is beautifully written and will stay with readers.  VERDICT A must-purchase title, recommended for all school and public libraries." —School Library Journal, starred review   ? "The well-constructed pacing of the novel, with its beautifully expansive prose punctuated by text messages between Sal and Sam, demonstrates the author's talent for capturing the richness of relationships among family and friends. The author of Printz Honor-winning Aristotle and Dante Discover the Secrets of the Universe (2012) offers another stellar, gentle look into the emotional lives of teens on the cusp of adulthood." —Kirkus, starred review   ? "Written in short chapters that eloquently describe Sal’s deepest fears and most intense moments of affection, the story celebrates compassion and the love of family." —Publishers Weekly, starred review   "As Sal tries to understand the way his fists seem to be acting on their own, as he sorts through memories and feelings about mothers in general and his mother in particular, Sal wraps readers in a 464-page hug, sharing longing and insight that ultimately affirms the goodness of strong families with the generosity to draw in and rescue those in need of steady, solid, unconditional love." —Bulletin   "What the world needs now is a book like this one. Profoundly important and moving. Read it."—Bill Konigsberg, Stonewall Award-winning author of Openly Straight and The Porcupine of Truth     “Thought-provoking and uplifting, this compelling coming-of-age novel  treats the complexities of being human with compassion, and—above all—love.”—Francisco Jiménez, Pura Belpré Honor-winning author of Breaking Through and Reaching Out   “A needed, lovely, and powerful book”—Connie Griffin, Bookworks, Albuquerque   "Sáenz presents readers with several beautifully drawn relationships... Sal is one of those characters you wonder about after the book is closed. Maybe Sáenz will tell us more."  —Booklist

Multi-award-winning novelist and poet Benjamin Alire Saenz is the author of several acclaimed books for teens, including the much-lauded Aristotle and Dante Discover the Secrets of the Universe. He lives in El Paso, TX. Follow him on Twitter @BenjaminAlireSa.

1. In the course of the novel, Sal, a senior in high school, questions his identity and his place in the world. These are issues many teenagers face at this stage of life. What is it about this transitional period that invites so much self-reflection?

2. Sal has a strong relationship with his adopted father, Vicente, who imparts to him a sensitivity that Sal fears is at odds with his genetic makeup and a deep-rooted sense of anger he can’t shake. What are your thoughts about “nature versus nurture” in this context, and how do you think Sal’s adoption has affected his development?

3. Talk about Sal’s struggle to come to terms with his racial identity as a Caucasian boy living with an adopted family that is Mexican-American. How does the fact of his ethnic background affect his feelings toward his family and his feelings of inclusivity, and how does that evolve as the novel progresses?

4. Sal’s relationship with his best friend, Samantha, is unusual in YA literature, as they have a solid friendship with no romantic complications. What do you think has drawn these characters together, and what makes their relationship so solid?

5. Vicente faces prejudice in this novel, tied to both his sexuality and to his ethnicity. Talk about his reactions to these encounters (such as his conversation with Mr. Infante) and what his responses say about his character.

6. Sal’s relationship with Mima is particularly special. How do you think Mima’s words of wisdom to Sal shape his actions and his relationships with the other characters?

7. Sam’s relationship with her mother is one of the more contentious pairings in the novel. Talk about Sam’s complex feelings toward her mother, and how those feelings evolve as the novel unfolds.

8. When Vicente’s former boyfriend Marcos comes back into the picture, what is Sal’s reaction? Why does Sal struggle to accept Marcos, and what does Vicente’s approach to the situation say about his relationship with his son?

9. Sal’s friend Fito has his share of struggles in the novel, including being kicked out of his own house by his mother. Talk about each of the characters’ responses to Fito’s plight (Sal, Sam, Vicente, Marcos) and what it says about each of them.