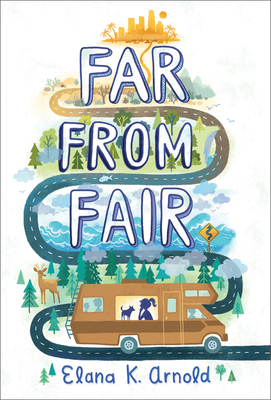 Odette Zyskowski has a list: Things That Aren’t Fair. At the top of the list is her parents’ decision to take the family on the road in an ugly RV they’ve nicknamed the Coach. There’s nothing fair about leaving California and living in the cramped Coach with her par­ents and exasperating younger brother, sharing one stupid cell phone among the four of them. And there’s definitely nothing fair about what they find when they reach Grandma Sissy's house, hundreds of miles later. Most days it seems as if everything in Odette’s life is far from fair. Is there a way for her to make things right?

With warmth and sensitivity, Elana K. Arnold makes the difficult topics of terminal illness and the right to die accessible to young readers.

Praise For Far from Fair…

"A tearjerker with a brain, this could prompt discussion not only of the right to die issue but also power and fairness."
—Bulletin

* "Arnold’s descriptive prose and short, episodic chapters warmly relay the family’s struggles. It’s an engaging, emotional ride as Odette learns the truth of one of her grandmother’s sayings: 'Even in the bad... there is opportunity for good.'"
—Publishers Weekly, STARRED review

"An affecting, delicately handled story of growing up."
—Kirkus

Praise for The Question of Miracles:

* "…Will catch readers, and help pull them toward seeking answers of their own for the story’s very large questions."—Booklist, starred review

ELANA K. ARNOLD completed her M.A. in Creative Writing/Fiction at the University of California, Davis. She grew up in Southern California, where she was lucky enough to have a family who let her read as many books as she wanted. She is the author of several young adult novels as well as the middle-grade novels The Question of Miracles and Far from Fair. She lives in Long Beach, California, with her husband, two children, and a menagerie of animals. Visit her website at www.elanakarnold.com.
Loading...
or
Not Currently Available for Direct Purchase